Pebble Technology has gone back to Kickstarter to fund its latest smartwatch — and blown through its $500K funding goal in minutes. 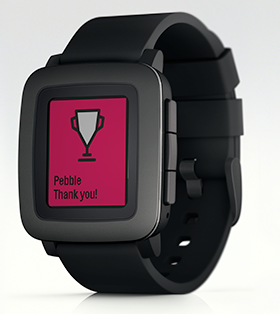 This morning, Pebble began a campaign for its Pebble Time, an Android and iOS compatible smartwatch with an always-on color e-paper display due to ship in May. Pebble is making the Time, in three colors, available exclusively through its Kickstarter drive at pledge levels that started at $159, explaining, “Pebble was brought to life by 68,929 backers who supported our vision three years ago. Even though we’ve grown tremendously since then, we’re still a small company battling some of the largest competitors in the world.”

All watches bought through Kickstarter are engraved with “Kickstarter Edition.” Standard Pebble Time features include a new timeline interface, a microphone for responding to notifications, support of standard watch bands, and up to seven days of battery life. Regular retail price for the Time will be $199.

Roughly half an hour into the campaign, Pebble had more than doubled its initial goal, and the campaign isn’t set to end until March 27.