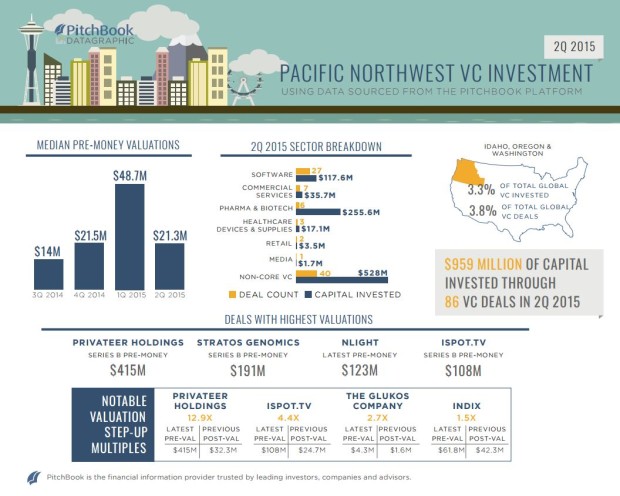 Companies in the Northwest raised a total of $959.28 million in the second quarter, up 35 percent over the same quarter last year, according to data compiled by PitchBook, a Seattle research company.

But not only were companies able to raise more funding they were also able to do it at higher valuations, especially startups just getting off the ground. PitchBook said the median pre-money valuations for angel and seed stage companies in the Pacific Northwest nearly doubled to $8.2 million in the second quarter from $4.4 million in the first quarter.

Overall, valuations for companies of all stages are also up. In the first-half of the year, median pre-money valuations totaled $33 million, up from $17.5 billion in 2014.

But the discrepancy seen in the first half of the year is likely explained by a number of significant deals that closed during the first quarter. A PitchBook spokeswoman explained that Seattle companies, like Porch and Tune, both raised money at high valuations during that period, or $435 million and $242 million, respectively. And with fewer deals in 2015 so far than in 2014, the median can also be affected.

In the second quarter, some of the top deals that raised money at high valuations include Privateer Holdings at $415 million; Stratos Genomics at $191 million; nLIGHT at $123.5 million; iSpot.tv at $107.7 million and Spaceflight at $62 million.

As we reported earlier today, more companies are choosing to stay private longer, which is leading companies to raise larger rounds at higher valuations. To compensate, venture capital firms are also increasing their stockpiles, with more money being raised in the second quarter by VCs than in any other three-month period since the end of 2007.

It appears as if early-stage companies are also benefiting from these trends.

Valuations in the Northwest are typically lower when compared to other geographies, like the tech-heavy Bay Area, and that’s still partially true.

According to PitchBook, median pre-money valuations for companies of all stages in the Bay Area during the first half of the year were $48.7 million, compared to $33 million in the Northwest. But that’s not the case for angel and seed stage companies. In the Bay Area, median valuations for those companies were $6.28 million, which is below the $8.2 million reported for the Northwest.

Before coming to any huge conclusions based on this data, however, it’s important to note that one investment can drastically change the outcome. It would take multiple quarters in a row of higher valuations before one could say for sure if something was a trend or just a one-time occurrence.

PitchBook’s data for the Pacific Northwest includes fundraising activity in Washington, Oregon and Idaho. For the year-to-date, it said financings are trending slightly higher here than last year, with $1.69 billion coming in during the first half through 165 deals, compared to $2.4 billion raised by 318 deals in 2014.