Hidden in plain sight on top of Fisher Pavilion at Seattle Center, literally in the shadow of the Space Needle, is a cylindrical antenna.

Fed by a fiber connection, the antenna connects wirelessly to two Wi-Fi access points near the International Fountain — about 600 and 700 feet to the northeast — using a slice of wireless spectrum previously reserved for television broadcasts. Those access points then distribute Wi-Fi to people nearby. 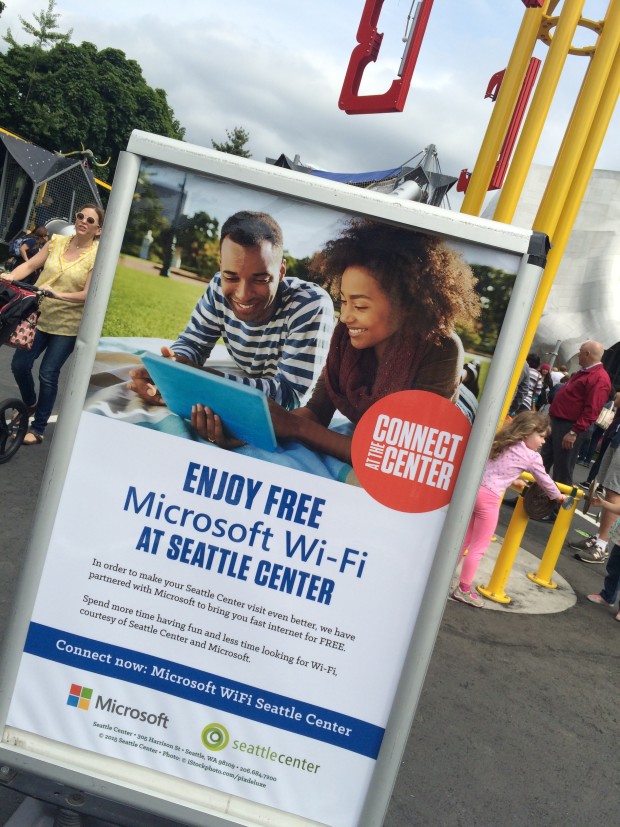 That distance between the antenna and the access points is several times farther than the reach of traditional Wi-Fi. In fact, given the opportunity, the signal could actually reach up to six miles or more, and penetrate buildings and walls in the process.

The free, Microsoft-funded public Wi-Fi network at the iconic Seattle location is one of a small but growing number of wireless installations around the world that use “white spaces” — pieces of the airwaves left vacant when broadcast TV channels went digital.

“It’s a playground to try to figure out how to maximize the power and capability of wireless,” says Todd Haugen, the GM of Microsoft Wi-Fi, sitting in the Seattle Center Armory recently and pointing to a map of the Wi-Fi network. “Our goal here is to be able to have a great asset for the city and work out how to make it the best-performing Wi-Fi network we can.”

The network will get one of its biggest tests yet this weekend, when tens of thousands of smartphone- and tablet-toting music fans descend on Seattle Center for Bumbershoot, logging on to the free Wi-Fi to try to send photos and videos, and connect with friends.

But those Bumbershoot attendees will soon realize that “Super Wi-Fi” has not yet attained its full powers.

For example, even though it travels long distances, it doesn’t necessarily translate into blazing fast speeds for users on the network. At Seattle Center, only two white spaces channels are currently available for Microsoft’s use, one for each of the two connected access points. That limits the speed and throughput.

In addition, everyday devices don’t yet operate on the 802.11af networking standard needed to receive a white spaces signal directly. So after coming in to the access points via white spaces, the signal at Seattle Center is then translated and broadcast from the two WiFi access points in the 802.11ac standard, compatible with today’s gadgets.

And white spaces technology is still in its infancy, awaiting specialized hardware that can fully capitalize on its potential.

The two white-spaces-connected access points are actually just a part of the larger Microsoft Wi-Fi network at Seattle Center. They’re shown in red on the network map below. All of the yellow dots in the network are access points fed by traditional fiber connections. Even though the WiFi network covers some 900,000 square feet, you can see from the map that it’s only a portion of the sprawling Seattle Center grounds. 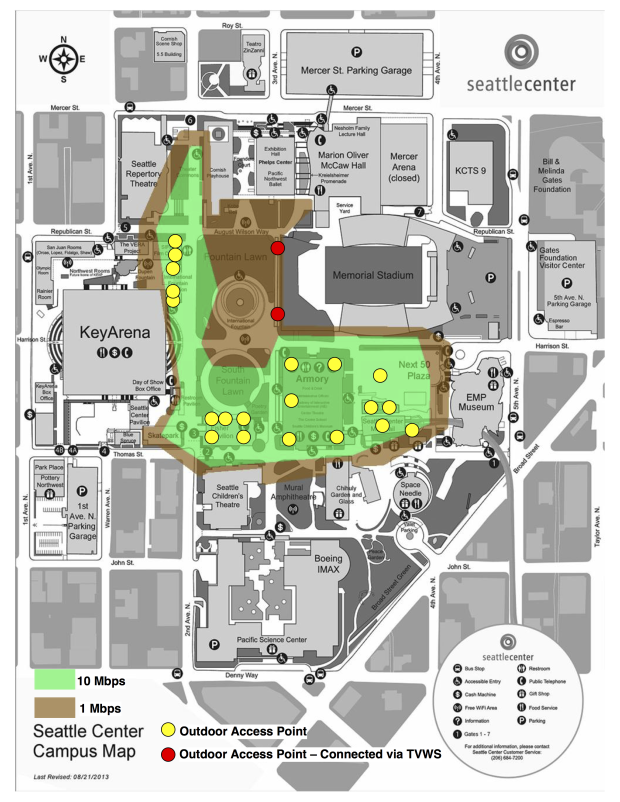 So even though the core technology can send signals for several miles, the setup means you won’t be able to access the network from the other side of KeyArena or the base of the Space Needle.

Over the course of a typical week, the Microsoft Wi-Fi Network at Seattle Center sees an average of 15,000 users connecting, according to the company, which is around 10 to 15 percent of overall visitors. Microsoft says users are seeing average speeds around 1.25 Mbps up and 5 Mbps down, with a speeds up to 10 Mbps down for those who log into their Microsoft accounts. Speeds are capped at 1 Mpbs for people who don’t log in, to help preserve network capacity, Microsoft says.

This helps to explain why were were less than overwhelmed by the “Super WiFi” when we tested it at Seattle Center earlier this year. Microsoft and the city of Seattle originally touted the new network as “5,000 times faster than the old system.” But depending on the circumstances, there’s a good chance you could see faster speeds on a cellular data network.

However, the use of white spaces technology does allow Seattle Center to provide Internet access from two additional hubs, extending the range of the network without needing to run fiber to those areas.

You’ve got to build the ecosystem, get the volumes up, drive the prices down, so you can really start deploying in large numbers. That’s what we’re trying to do.

In other parts of the world, the benefits are even more pronounced. Microsoft is supporting a series of white spaces projects — 14 as of June — in countries around the world, in places including Botswana, the Philippines, Indonesia, South Africa, Uruguay, Jamaica and Nepal. The technology helps to provide Wi-Fi in places where it might not otherwise be feasible.

Part of Microsoft’s goal is to “spin up the ecosystem” of chip manufacturers and device makers creating hardware for white spaces technology. The company worked with Adaptrum, Aruba Networks and HarborTech Mobility on the Seattle Center project. Microsoft also works with companies including 6Harmonics and Ruckus Wireless on a regular basis.

“You’ve got to build the ecosystem, get the volumes up, drive the prices down, so you can really start deploying in large numbers,” Haugen said. “That’s what we’re trying to do.”

Microsoft has signaled much broader ambitions for its Wi-Fi initiatives. An apparent consumer service simply called Microsoft Wi-Fi, promising to offer “hassle-free Internet access around the world,” was briefly and perhaps inadvertently touted on the site microsoftwifi.com in June before the teaser was quickly taken down, replaced by a “coming soon” message.

A Microsoft spokesperson confirmed that the “coming soon” service is part of Haugen’s group but said the company has nothing to say about it at this point.

In the meantime, at Seattle Center, Bumbershoot visitors will be putting the Microsoft network to the test this weekend. Just don’t plan on using “Super WiFi” to send your friends that giant video clip of Faith No More on the main stage. Given the size of the crowd and the network limitations, there’s a chance that people connecting to the network could see very slow speeds.