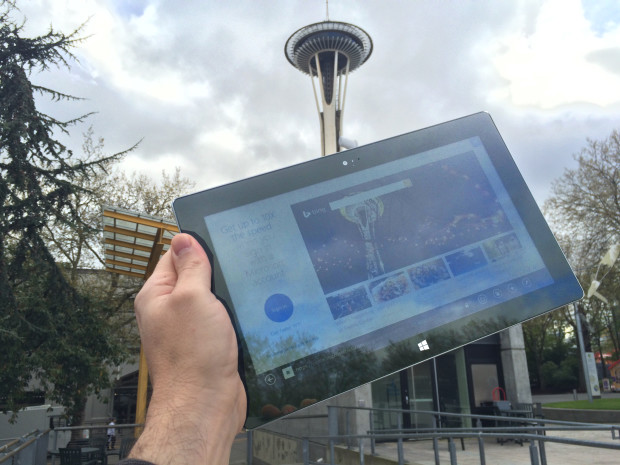 I’m sitting here on the roof of Fisher Pavilion, in the shadow of the Space Needle — or at least there would be a shadow if these late morning clouds would lift. For the past couple days, I’ve been hanging out at Seattle Center, testing the new free public WiFi unveiled by Microsoft this week, in conjunction with the city of Seattle. 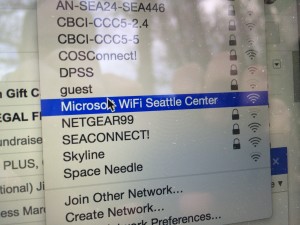 The network takes advantage of unused television “white spaces” spectrum, with the promise of faster and more robust connectivity for users — penetrating through buildings and walls, with far-reaching signals that can serve many more users at a time. Announcing the news, Microsoft and the city of Seattle said the new network would be “5,000 times faster than the old system” at Seattle Center.

That suggests a blazing fast network, but in reality, in my tests over the past two days across Seattle Center, I’ve yet to see download speeds of more than 10 Mbps, as measured by SpeedTest.net and other online tools. In some cases, the speeds were less than half that, based on my experience.

(This was all when I was logged in with my Microsoft Account, which is another important note: To get the fastest speeds, users will need to log in with a Microsoft account, or set one up if they don’t have one. A special app coming this month will ultimately be required for the fastest speeds.) 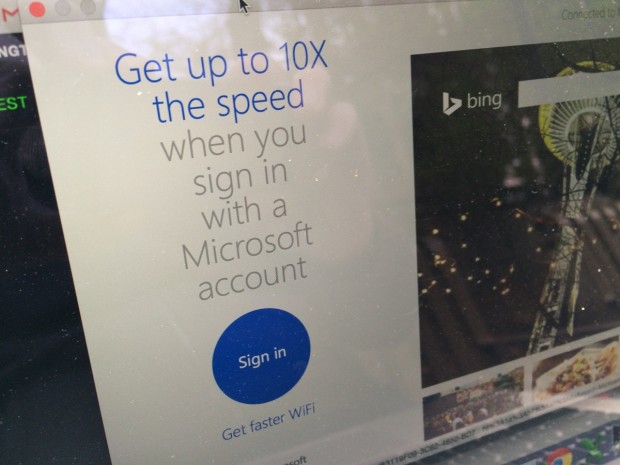 Maybe 10 Mbps down is 5,000 times faster than the old Seattle Center network (a Microsoft spokesman says the company stands by the claim) but if that’s the case, it’s seems like more of a comment on the state of old network. Many users will be able to get faster speeds via their smartphones on a normal day at Seattle Center.

Logged out of a Microsoft Account, the speeds were less than 1 Mbps, consistent with Microsoft’s statement that logging in will result in 10 times faster speeds.

Setting aside the speed issue, the Microsoft system is robust and reliable in my experience. I have been able to get at least some connection from most parts of the Seattle Center campus. I was able to easily view YouTube videos, upload photos, and do everything else online without running into problems or buffering.

The speed declined dramatically in some areas, such as the International Fountain, where the company says it is still in the process of finishing the network setup. The company also has some work to do to get a reliable connection into the basement of the Seattle Center Armory, home of the Seattle Children’s Museum.

Microsoft set up the network as community service, at no cost to the city, and also brought in a fast fiber connection to serve the system. However, the company does get plenty of promotional consideration in return, including the Microsoft Account requirement for the fastest speeds, and a splash screen that features a prominent Bing search box.

For the record, I tested with a variety of devices, including a Surface tablet running Windows 8.1 and a newer MacBook Pro, and saw similar results across each device.

Of course, Seattle Center over the past couple of days has been practically vacant. The real test of this new system will come at big events in the spring and summer. Can this network really handle more than 25,000 simultaneous users, as the city and Microsoft claim? Let’s see what happens this year at Bumbershoot.