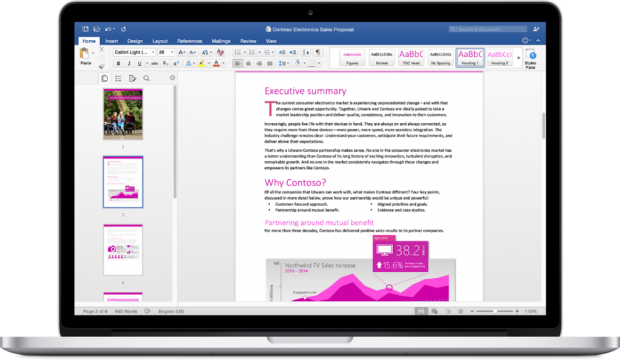 Office 2016 for Mac is available to the general public, five years after the software suite’s last major refresh, Microsoft announced today. Microsoft is also promising to keep Mac users up to date with updates at least once per quarter.

With general availability, Office 365 subscribers can update to the latest versions of Word, Excel, PowerPoint, Outlook and OneNote. The new release has Retina graphics, support for full-screen mode and multi-touch gestures. Users also get the familiar ribbon interface and robust sharing features found on the Windows versions of Office.

Word has a new Design tab to easily alter layouts, fonts and colors, and there are improved analysis functions in Excel that suggest the best charts for your data. PowerPoint’s new presenter view gives an overview of your slide deck, while Outlook gets push mail support and has better inbox organization features.

OneNote for Mac is also included in the software bundle. While the note-taking software has been available for Apple computers since last year, this is the first time it will be downloaded with the rest of the Office suite.

The Office apps closely match the Office for iPad experience since it shares the codebase with the iOS counterpart. Engineering lead Han-yi Shaw told the Wall Street Journal that they’re planning on monthly updates, at least, and will definitely update every quarter.

Microsoft released a preview version of the updated productivity suite earlier this year, showing off many of the features available in today’s update. The team got over 100,000 pieces of feedback, resulting in seven updates over the four-month preview period.