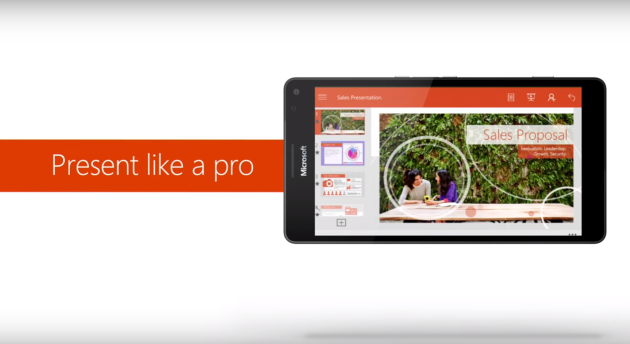 Microsoft may be putting a lot of weight behind their Office apps for iOS and Android phones, it hasn’t forgotten about its own operating system. Today, the software giant announced a host of new features for Office Mobile, which will now ship on every Windows 10 phone, including the new Lumia 950.

Each app is optimized for mobile use, with touch-friendly controls and gestures, which have already been honed in the Android and iOS versions of the apps. Excel and PowerPoint in particular feature quick touch controls for making changes on the go.

The apps also feature stronger collaboration features, with a focus on commenting on documents. The inclusion of Skype for Business means you can collaborate on documents while in a virtual meeting on the go.

The updated apps all also work with Continuum, Microsoft’s tech that lets your phone power a desktop-like experience when connected to a monitor. However, while editing documents on the phone will be free like other mobile apps, Continuum requires an Office 365 license. Users will be able to test out the Continuum features for free through March 31 though.

Microsoft also started testing Office 365 Planner, which helps teams assign and manage tasks to more easily work together on projects. The app likely builds on Microsoft’s purchase of Wunderlist, which offers many similar features, including the ability to comment on tasks, attach documents to tasks and set up due dates for team members.

Planner is available to Office 365 First Release customers with Enterprise, Business Essentials and Business Premium plans. The worldwide release will come in the next few weeks.