Microsoft CEO Satya Nadella was awarded nearly $18.3 million in total compensation for the company’s 2015 fiscal year, consisting of a $1.2 million salary, $12.8 million in stock and a $4.3 million bonus, according to Microsoft’s annual proxy statement, released a short time ago.

The cash bonus, representing 120 percent of Nadella’s target, is based on the board’s review of the CEO’s performance.

The board says in the proxy statement, “In fiscal year 2015, operating income and earnings per share declined, while consistent progress was made in building future growth opportunities. Mr. Nadella provided strong, consistent vision and execution on our mobile-first and cloud-first strategy, continued to effectively guide the transformation of the Company’s culture and he effectively represented the Company with customers, partners, investors and employees.”

It continues, “Mr. Nadella established and articulated the Company’s three broad ambitions to focus the Company’s offerings, and consolidated the operating systems and devices groups into the Windows and Devices Group. Under his leadership, Windows 10 was successfully launched and the executive compensation program became significantly more performance-based.”

Each of Microsoft’s named executives in the proxy made at least 100 percent of their target awards for their cash bonuses for the 2015 fiscal year. Here’s a Microsoft chart detailing compensation for each senior leader. 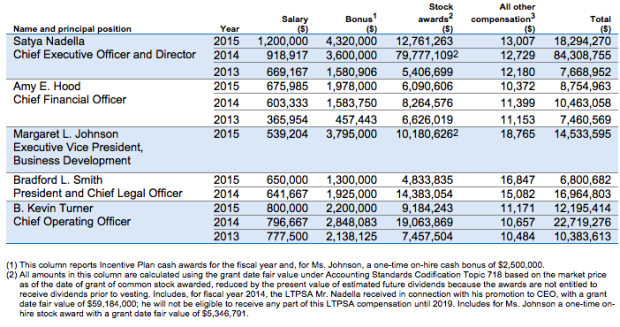 In related news, Microsoft announced plans to nominate two new board members: Sandra Peterson, group worldwide chairman of Johnson & Johnson; and Padmasree Warrior, former chief strategy officer and chief technology officer at Cisco. Another board member, Maria Klawe, is retiring from the board.

Microsoft shareholders will vote on the board nomination on Dec. 2 at the company’s annual shareholders meeting in Bellevue, Wash.