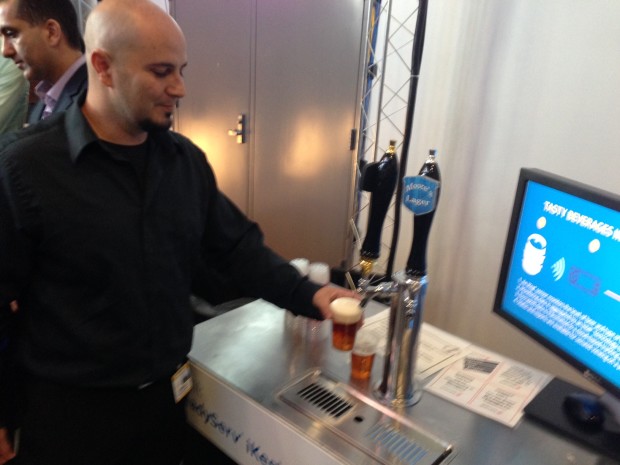 LAS VEGAS — We’ve been hearing a lot about the Internet of Things at this CES — the connected devices that are supposed to make our lives easier.

Now, here’s one example that bartenders everywhere can appreciate. Meet the iKeg, a device that’s used to track exactly how much beer is left in a barrel.

That’s a critical issue for bartenders, which today have no real good system for tracking keg beer flow.

The inventory and order management system, which starts with a $499 installation fee and a monthly service charge, includes weighted RFID-enabled measurement rings which sit underneath a keg. The sensors detect how much beer is in the keg, and then sends that data to the cloud where bar owners can access data on mobile devices.

“As a restaurateur, you can walk up and scan that tag. It will say: ‘I have Budweiser in that keg, and it is a quarter full, or, it is time to order again,'” explained Jared Johnson, a bartender who showed off the technology at the Intel booth at CES.

The patent-pending iKeg device was developed by Carmel, Indiana-based SteadyServe Technologies, with the system now in use in about 60 restaurants and bars in the Midwest, including Ruth’s Chris Steak House and Buffalo Wild Wings.

If this concept sounds familiar, you may recall a Seattle-based upstart by the name of MetaCraft which is attempting to solve the same problem.

“The journey that beer makes as it travels from the brewer to the frosty pint glass in your hand is much the same today as it was in the 1970s,” said co-founder and CEO Gabe Ingram, a beer nut and former Microsoft engineer in a presentation at the 9Mile Labs Demo Day last year. “The process is labor intensive with a bunch of paperwork, and little or no automation, and almost no data to get the job done. Literally, you had to lift and shake 100-pound kegs to guess how much beer you had left. Our objective is to save beer, to make money.”