Updated throughout with details of announcement.

Blue Origin, the space venture founded by Jeff Bezos, confirmed plans this morning to build a $200 million space launch and manufacturing facility on Florida’s Space Coast, creating a new base of operations for the company’s orbital space ambitions.

We’ll be launching from here later this decade.
The company will have manufacturing facility at Exploration Park, south of NASA’s Kennedy Space Center, and eventually will conduct orbital launches from Launch Complex 36.

“One of the unique things about our Florida operations is that we aren’t just launching here, we’re building here,” Bezos said in prepared remarks during a news conference at the site. “At Exploration Park, we’ll have a 21st century production facility where we’ll focus on manufacturing our reusable fleet of orbital launchers and readying them for flight again and again.”

He added later, “We’ll be launching from here later this decade.” 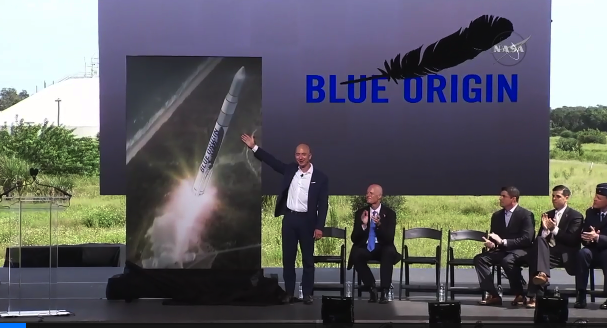 At the conclusion of the event, Bezos came back on stage to unveil a rendering of Blue Origin’s future orbital launch rocket, using its BE-4 and BE-3 engines, promising more details next year.

“I don’t know how long this will take, but one day, I look forward to having a press conference with you guys in space,” Bezos told the crowd. “Looking forward to it very much.”

The news was greeted by officials including Florida Gov. Rick Scott as a major milestone for the commercial space industry and for the region following the end of the Shuttle program.

Blue Origin, based south of Seattle in Kent., Wash., is planning to send scientists and researchers to the edge of space in its New Shepard space capsule, using a vertical-launch-and-landing system. In addition, the company is working on an orbital launch system, and it’s developing the BE-4 rocket engine for potential use on United Launch Alliance’s next-generation rockets.

In 2013, Blue Origin lost out to SpaceX in a bid to take control of Launch Complex 39A at Kennedy Space Center.

Blue Origin has posted the prepared text of Bezos’ remarks to announce the news.

Today we announced that we’ll be flying our orbital launch vehicle from Florida. Cape Canaveral has long been a gateway to humankind’s greatest adventures. As a kid, I was inspired by the giant Saturn V missions that roared to life from these shores. Now we are thrilled to be coming to the Sunshine State for a new era of exploration.

Our new home on the Space Coast is anchored by the launch site at Complex 36. During its 43 years of service, 145 launches thundered into space from this site. The Mariner missions – the first U.S. spacecraft to visit other planets – lifted off from Complex 36. So did Pioneer 10, the first spacecraft to travel through the asteroid belt; Surveyor 1, the first U.S. spacecraft to land softly on the Moon; and multiple weather, communications and national defense payloads hopped their rides to space from LC-36. The site saw its last launch in 2005 and the pad has stood silent for more than 10 years – too long. We can’t wait to fix that.

One of the unique things about our Florida operations is that we aren’t just launching here, we’re building here. At Exploration Park, we’ll have a 21st century production facility where we’ll focus on manufacturing our reusable fleet of orbital launchers and readying them for flight again and again. Locating vehicle assembly near our launch site eases the challenge of processing and transporting really big rockets.

We’ll be launching from here later this decade. You will hear us before you see us. Our American-made BE-4 engine – the power behind our orbital launch vehicle – will be acceptance tested here. Our BE-4 engine will also help make history as it powers the first flight of United Launch Alliance’s Vulcan rocket.

Residents of the Space Coast have enjoyed front-row seats to the future for nearly 60 years. Our team’s passion for pioneering is the perfect fit for a community dedicated to forging new frontiers. Keep watching.

We contacted Blue Origin to find out about any impact on the company’s operations in the Seattle area as a result of this morning’s announcement, but the company declined to comment beyond its public statement.