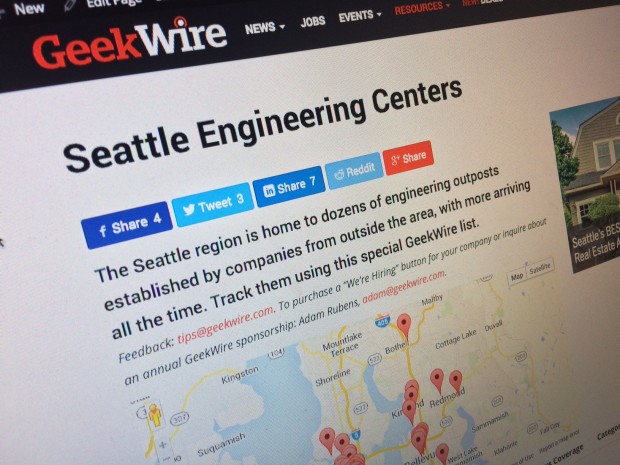 One of the biggest Seattle stories we’ve tracked at GeekWire recently is the arrival of the Silicon Valley tech giants.

Nearly every week, it seems that another large tech company is announcing plans for an engineering or development center in Seattle, gobbling up prime office space and top-notch coders along the way. 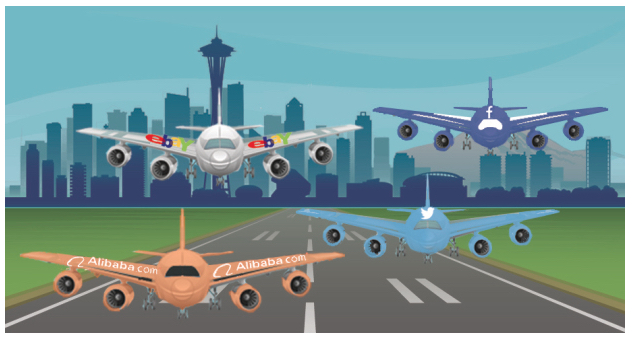 Just in the past year, companies such as Apple, Dropbox, Uber and Palantir have chosen Seattle for new offices, hoping to mine the region’s rich technical talent.

We’ve tracked this phenomenon closely at GeekWire, breaking stories about the new offices and chronicling the expansion efforts of companies like Facebook, HBO, Twitter and SpaceX.

Today, we’re excited to announce a new feature on GeekWire, which tracks these engineering centers, and links to our past news coverage. You can find the list and map under the resources tab in the top navigation bar of GeekWire, or simply check it out here.

Amazingly, we’ve identified 51 engineering offices — including fast-growing offices for companies such as Groupon, HP and Oracle. The list also includes retailers like Sears, Best Buy and Staples, all of which have picked Seattle in the past 10 months to mine the depths of e-commerce talent in the region.

The engineering outpost trend really got rolling just over a decade ago when Google identified the region as a hotbed of talent, primarily pulling engineers out of Microsoft. Now, the search giant has three offices in the Seattle area — in Kirkland, Bothell and Seattle’s Fremont neighborhood — which employ well over 1,000 people.

We’ll continually reference this list, and add to it over time.

It is very much a work in progress, and we welcome your suggestions and tips. We also plan to use this list as a reference point as we tell more stories about the companies establishing offices in the Seattle area.

The new engineering centers are very much transforming the Seattle tech community as we know it, creating some short-term recruiting challenges for startups and existing companies. But the arrival of these companies also is diversifying the tech landscape of Seattle, creating a more vibrant tech ecosystem that goes beyond the historical roots of Amazon and Microsoft.

We hope you’ll enjoy the list! Check it out here, and do let us know if anyone is missing.

Editor’s note: For those interested in tracking the startup scene, make sure to check out the GeekWire 200, presented by EY. This list tracks the top privately-held tech companies in the Pacific Northwest.

The GeekWire list of engineering outposts established by companies from outside the area.