The big screens have been returned to their boxes. The echo of rumbling soundtracks have ceased commingling, their echoes faded from the concrete walls. The enormous images of promised future adventures lie rolled into long tubes in the back of FedEx vans. The consoles lie hidden among cables and power cords tossed haphazardly atop cornstarch-based packing popcorn and bubble-wrap.

The story of E3, however, isn’t over. In many ways, it is just beginning. For the gamers, new games haven’t shipped. All that remains are images burned onto retinas and traces of adrenaline flowing through the veins of those lucky enough, after waiting in long lines, to experience the pre-released versions of Star Wars Battlefront, Halo 5 or Rise of the Tomb Raider.

I always find the most interesting stories along the edge of big conferences, little booths or tables by the food carts, vendors stuck in the dim lights along the periphery on the way to the water fountain or restroom—companies slightly out of sync with the theme but proffering products or ideas of value nonetheless. At E3 I found interesting innovations in headphones and speakers, a little camera that presages a personalized virtual reality, and a UK-based programming team rewriting the way to identify talent.

Sound Rises Above the Noise

It is hard to characterize Turtle Beach as being on the periphery, with their giant headphones statue looming over passersby, but unlike the big game companies, they weren’t endlessly filling every molecule of space around their booth with light and noise. They were, however, sharing the most personal and intimate part of the gaming experience: sound. Sure, they had cool headphones, like the wireless, noise canceling Elite 800X that sport real surround sound and unique “super human hearing” that makes it possible to hear gaming opponents sneaking up on you.

But the various headphones, as intriguing as they were, did not catch eye, or well, ear, like their HyperSound speakers. These speakers received FDA approval in February of 2014 to be sold to improve clarity and comprehension of sound for the hearing impaired. A paper at the Tribological Society in January 2015 titled, “Novel Ultrasonic Sound Carrier Significantly Improves Speech Discrimination in Subjects with Hearing Loss” (Dr. Ritvik P. Mehta , January 22, 2015) outlines the clinical value of a system that aims sound with laser-beam-like efficiency directly to individuals.

Imagine you are sitting in a crowded room with the family all about and your hearing isn’t what it used to be. Everybody is paying attention to the game, but all you hear is a muddle of noise. Flip on these speakers and their auditory expert tuning directs sound directly to you and only you. You can hear fine detail again just like everyone else, and perhaps the most interesting thing is no one else hears anything differently. I tried them and found that they worked as described.

When HyperSound Clear ships later this year, they will help the hearing impaired, but that isn’t their only application. Imagine now standing in front of a retail display but not hearing anything until you enter the envelop of sound. Hit the spot on the floor and suddenly you can hear product information that reaches only that one spot. It’s a boon for retailers that don’t want to transform quiet floors into the equivalent of E3 with ambient audio bombardment.

Did these speakers make you forget all about the sites and sounds of E3? Me too. But they were not the only audio products of note.

Plantronics was demonstrating their Rig 500E gaming headset that completely deconstructs, allowing for different ear cups, attachments and comfort levels. Polk was showing their high-end Striker Pro gaming headset that blends just as nicely into a scotch and jazz moment as it does shooting it up on Halo, or conducting a video conference via Fuze. Blue Microphones was also, in a small booth, showing off their Mo-Fi powered headphones that look like something a character in a techno-noir game might wear, but with their built-in amp, they transform the listening experience on mobile devices into a richer, fuller experience.

Sound was a story on the perimeter of E3 that stood out above the noise. 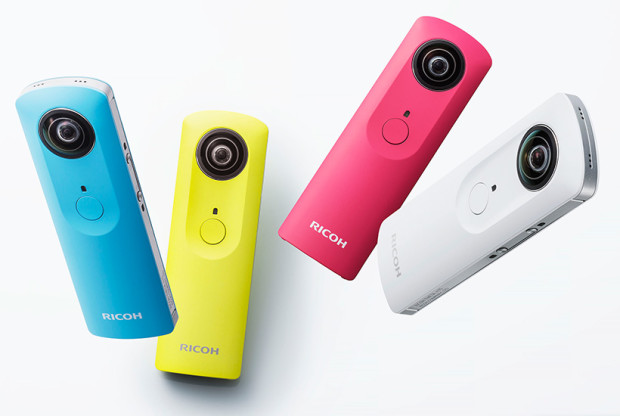 But sound was not the only interesting story at the edge of E3. Another interesting product I found was the $299.95 Ricoh Theta, a kind of next-generation Flip Camera that takes 360-degree panoramas. The images can be viewed instantly within a VR environment. I purposefully say Flip, because this camera is innovation on a leash already being pulled by obsolesce. The Ricoh Theta will expose the market to 360-degree photography (the link above includes many examples of the cameras panoramic capture capabilities), but I’m betting Apple or Samsung will build similar cameras into future phones so people can capture a 360-degree panorama and then explore it immediately on the same device. A whole new way of not being in the moment.

A College for Gamer Makers

Finally, I want to share my encounter with Michael Warburton, the prototype for a teacher of Millennials. His well-muscled, tattooed-arms reach out of his tank top to shake hands with people so he can proudly introduce his students. Warburton is a teacher and the head of Rizing Games. His students are game developers in Warburton’s innovative Cambridge Regional College program.

They were taught not just how to write code, but how to deliver into app stores and support customers. Figuring out how to finance a trip to Los Angeles and manage a booth at E3 is all part of the curriculum. They brought 13 student games for iOS and Android to E3. As part of the program, Warburton helps students identify their talents, and direct them to additional education opportunities where their design, art, storytelling or coding expertise can be developed.

Is E3 a STEM-inspired Future?

E3 also reinforced my belief that just concentrating on STEM is a poor choice for education. While image rendering and character AI were impressive, most of it is directed at death and destruction, even in the games that claim some higher moral redeeming qualities like those in the Star Wars franchise, or games aimed at younger children. Perhaps the most beautifully rendered images I saw were from the long-awaited Last Guardian, but even there, in an ancient city, a mythical beast and a child end up destroying precious archeological ruins (albeit fictional ones) for some reason. If we treated the real world they way we treat fictional video game worlds, climate devastation and the post-apocalyptic erosion of society would not be forecasted futures, but a current reality.

Perhaps we should be thankful that people focus their energies, for the most part (ISIS and The Taliban not withstanding), inside of games. But it also tells me our society needs something more aspirational than algorithms detached from context and meaning in order to create a better future. It also needs a little bit of poetry, and a not insignificant amount of quiet and calm.