On its first day of trading as a publicly held company, PayPal’s value soared to $50 billion following its spin-out from eBay. That interest now appears to be fueling a secondary wave of deals in the high-tech payments sector.

The latest high-profile move was made today by Visa, which announced an investment and partnership with Stripe, the San Francisco-based payments startup. Visa declined to disclose details of the investment, according to its blog post, but with the latest injection, Stripe is now valued at $5 billion, up from $3.5 billion, reports Re/Code.

In addition to the investment, Visa says with its support, Stripe will be able to accelerate its international expansion, and will be able to deploy new experiences like “buy buttons” for online companies. Prior to the investment, the four-year-old company had raised $200 million Sequoia Capital, Peter Thiel, and Elon Musk. The newest round also includes Kleiner Perkins as an investor.

The payments business has radically changed over the past few years, morphing from a business that was dominated by clunky legacy players to technology-oriented developers who focused on ease of use and speed. Stripe promises to get companies up and running quickly with a simple fee structure of 2.9 percent plus 30 cents per transaction and no monthly fees. Stripe is now processing billions of dollars a year for thousands of businesses, including Twitter, Kickstarter, Shopify, Salesforce and Lyft. 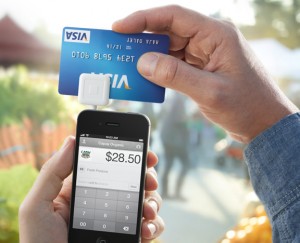 Another company that fits squarely in this bucket is San Francisco-based Square, the payments company co-founded by Twitter’s Jack Dorsey. Square is best-known for its white plastic card reader that attaches the headphone jack of an iPhone or iPad.

It has done well by promising simplicity and ease of use, and while its success has wavered in the past couple of years, with a costly partnership with Starbucks, it has regained ground by expanding into other areas, such as business lending and payroll processing.

It too may now see an opportunity with PayPal’s jump into the public markets. According to a report in Bloomberg late last week, Square has filed confidential paperwork with the SEC for an initial public offering. Some companies can file privately with the SEC as long as revenues fall short of $1 billion annually. Last year, Square processed $30 billion in payments, and is worth an estimated $6 billion after raising roughly $500 million.

Today, PayPal’s shares are up roughly 3 percent or $1.14 to trade at $37.53 a share. At that level, it’s fallen a little bit since it’s opening day, and is now worth roughly $46 billion. With that in mind, Stripe and Square, valued each by private investors at $5 billion and $6 billion, respectively, still have a long ways to go.