SAN FRANCISCO–Intel is upgrading its gaming chops with a set of new partnerships and a new product announced today alongside the Game Developers Conference in San Francisco. First off, the company showed off a new 5th generation LGA-socketed Core processor with Iris Pro integrated graphics that marks a 100-fold improvement over the company’s graphics performance in 2006.

In addition, the chipmaker has partnered with gaming startup Raptr to help PC gamers with Intel’s integrated graphics get the most out of every game that they play. One of the biggest problems with PC gaming is that each title comes with a smorgasbord of hard to understand graphics options that people have to wade through in order to optimize their graphics experience, which can be a confusing process.

“For the average user, they don’t know the difference between anti-aliasing and ambient occlusion,” Raptr CEO Dennis Fong said.

The partnership will give users of Intel chipsets optimized settings that they can set with the touch of a button after installing Raptr’s utility on their PC. Raptr builds the settings for each game from a list of recommended settings provided by Intel, and then uses machine learning and metrics from client machines running Raptr to optimize the settings even as updates change how different machines perform in different games. 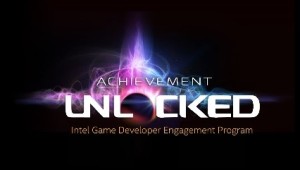 Looking forward, Intel wants to promote additional interest in developing games for its chipsets with a new “Achievement Unlocked” developer program that’s designed to equip developers with more tools to develop for its Core and Atom processor lines, as well as its Iris integrated graphics processing units. Through the program, developers will get a bidirectional communication channel with Intel to discuss building games with the company’s chips, along with technical assistance and success mentoring.

Intel has also been working with Microsoft to help the Redmond-based company build its DirectX 12 developer tools for graphics applications from the ground up for 4th and 5th generation Core processors. That work has led to massive performance gains for both CPU and GPU usage.

On the industry side of things, the company also threw its support behind the International Game Developer Association’s push to increase the number of women in game development. The IGDA is pushing to double the number of women in the industry by 2025, with the eventual goal of seeing the demographics of game development reflect the demographics of those people who play games.