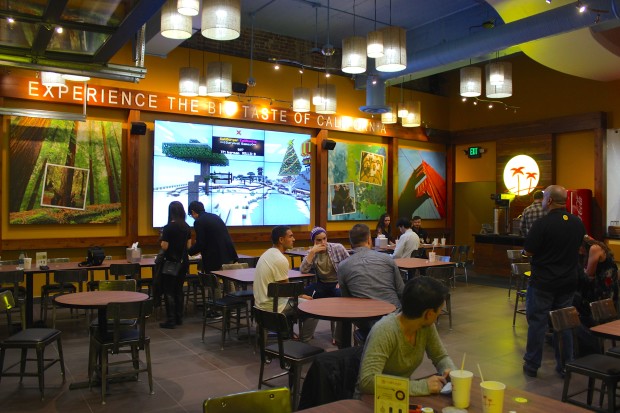 Another new restaurant is opening in Seattle — this one, though, features wireless charging tables, mobile ordering, and lets customers compete in multiplayer Minecraft games on a giant mounted screen.

CaliBurger will open the doors to its first U.S. location on Wednesday in the heart of Seattle’s University District, just steps away from the University of Washington campus.

The fast-casual restaurant, which serves burgers that will remind many Americans of the famous In-N-Out — CaliBurger was actually sued by In-N-Out for trademark infringement in 2011 — first launched in China and has a handful of locations across Asia, Europe, and the Middle East.

But it has yet to break ground in the Americas, even though it was founded in Santa Monica, Calif. — until now. 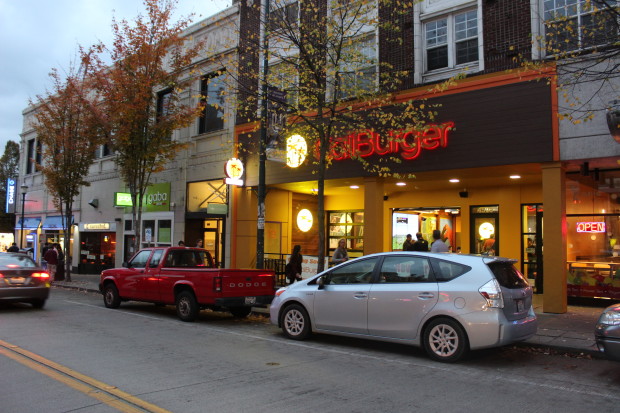 We had a chance to check out the new CaliBurger spot at 4509 University Way NE, which takes over the old Dawg Den space, and came away very impressed with the burgers, fries, and spiked shakes. More on the grub later.

What’s unique about this particular CaliBurger is the technology. From the moment you walk inside, a mounted iPad lets you place an order without actually going to the register, or you can also use the CaliBurger mobile app to buy food and drinks. 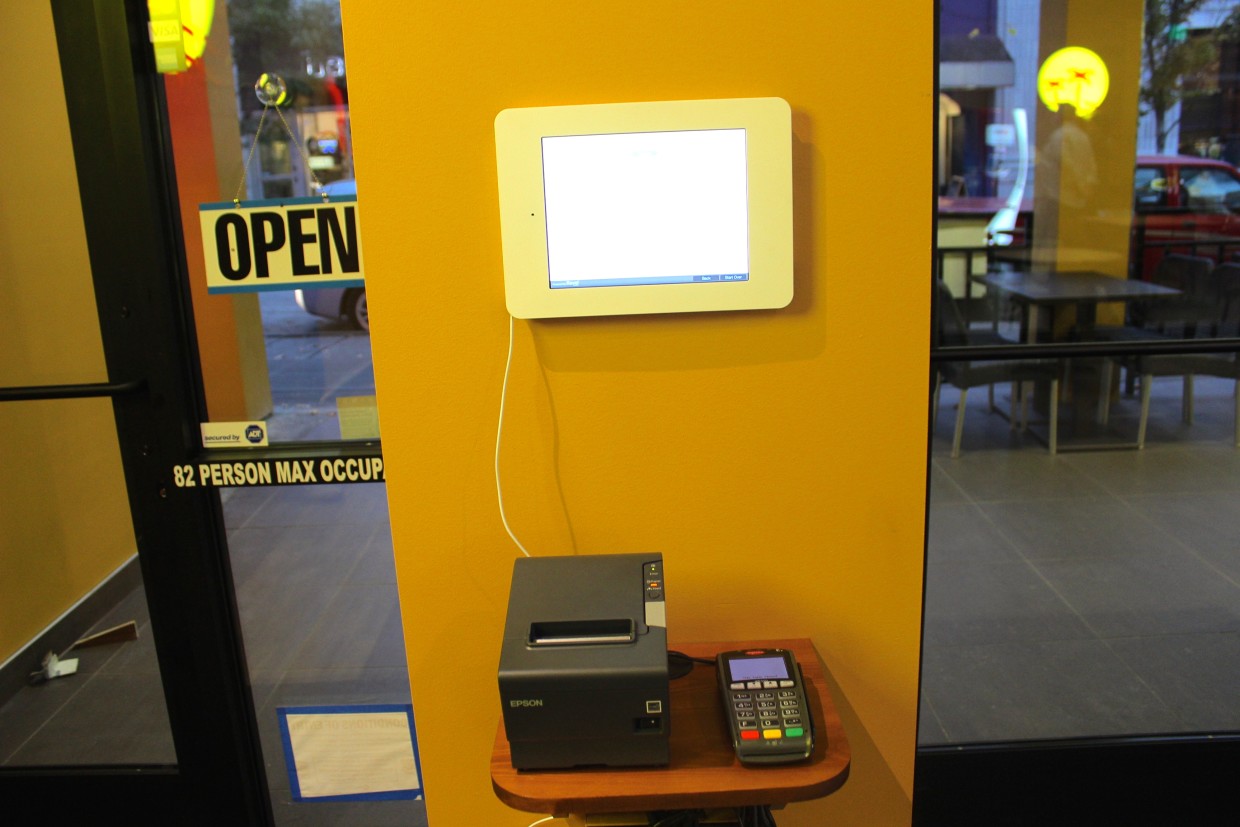 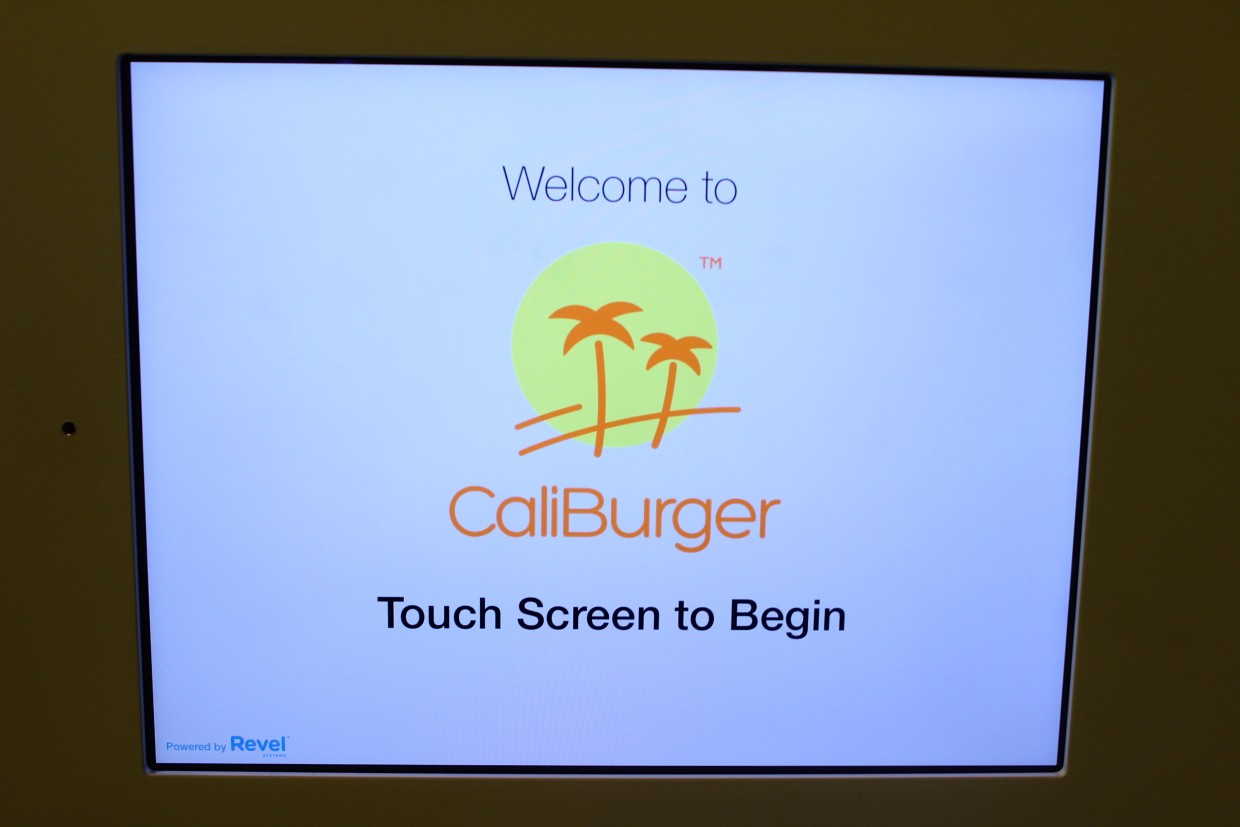 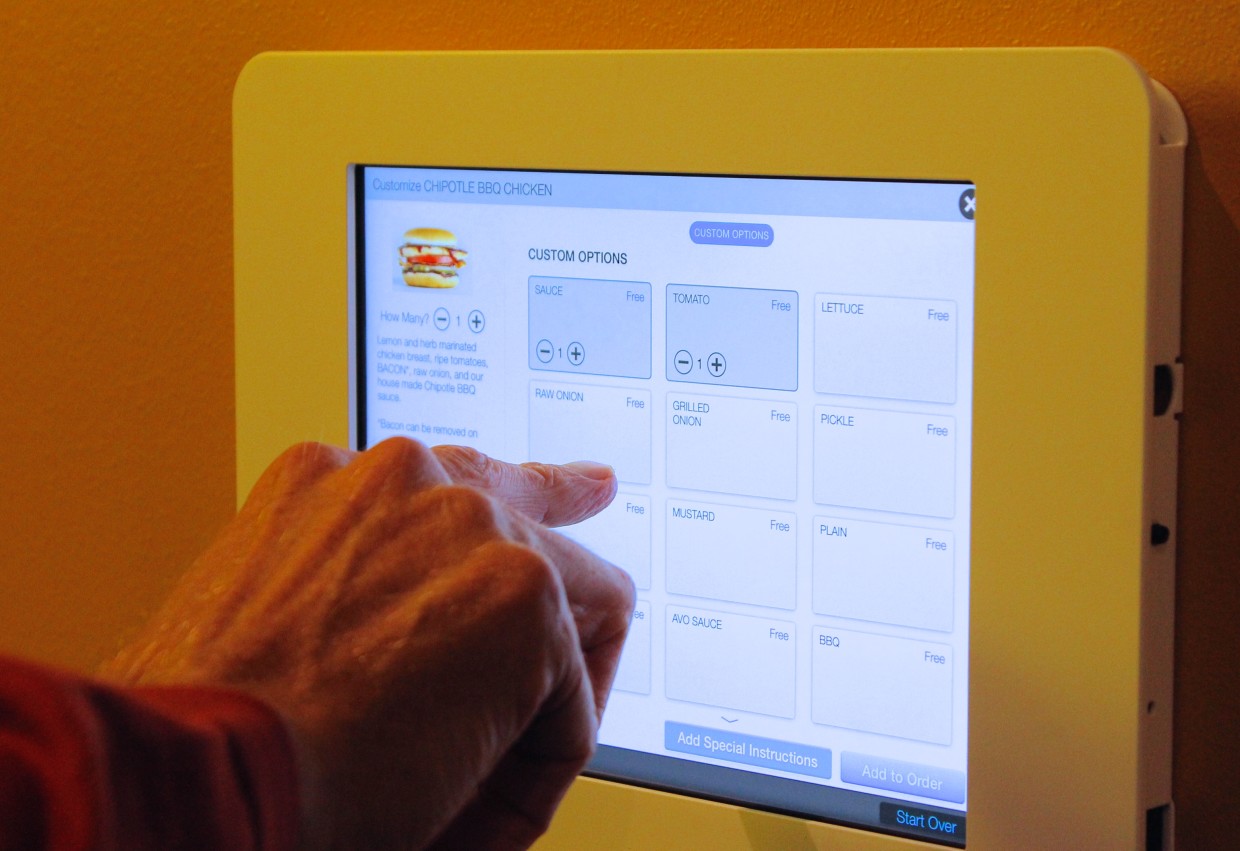 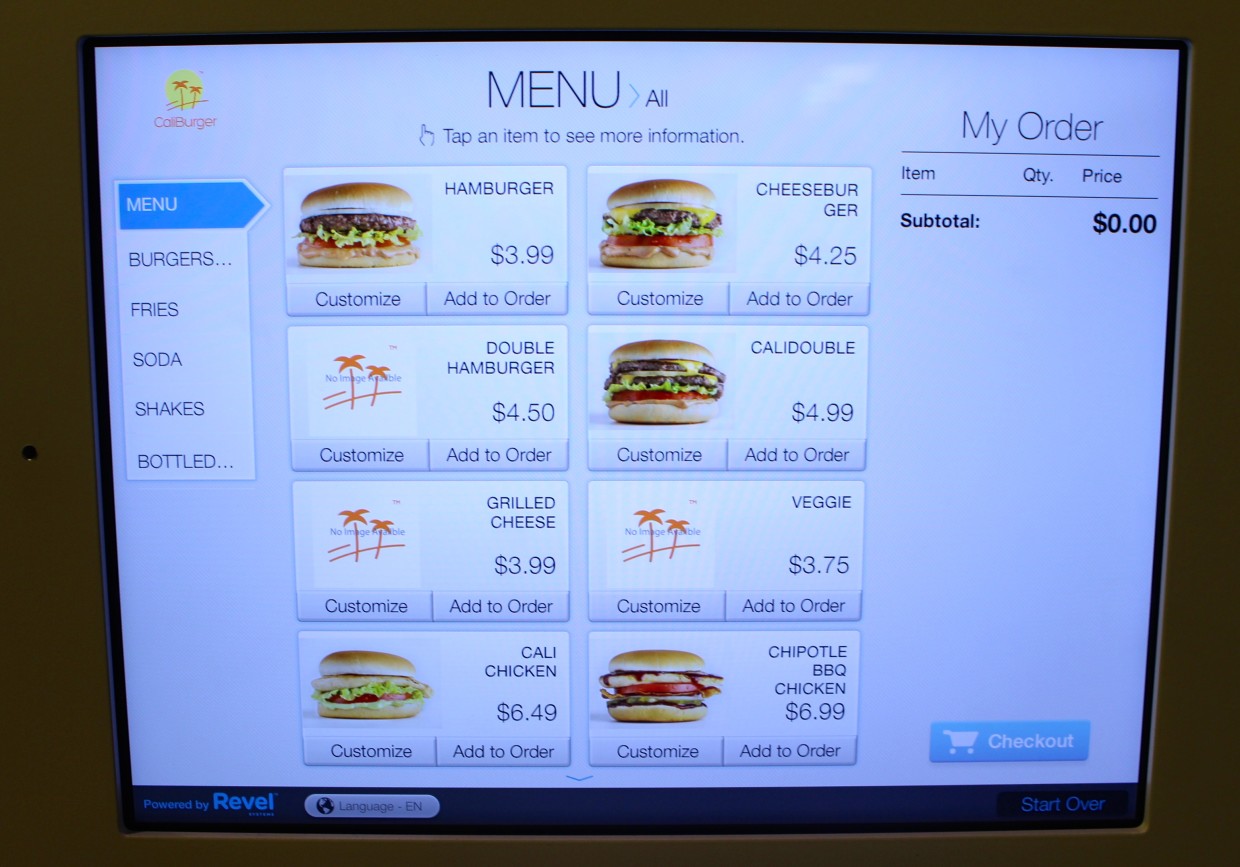 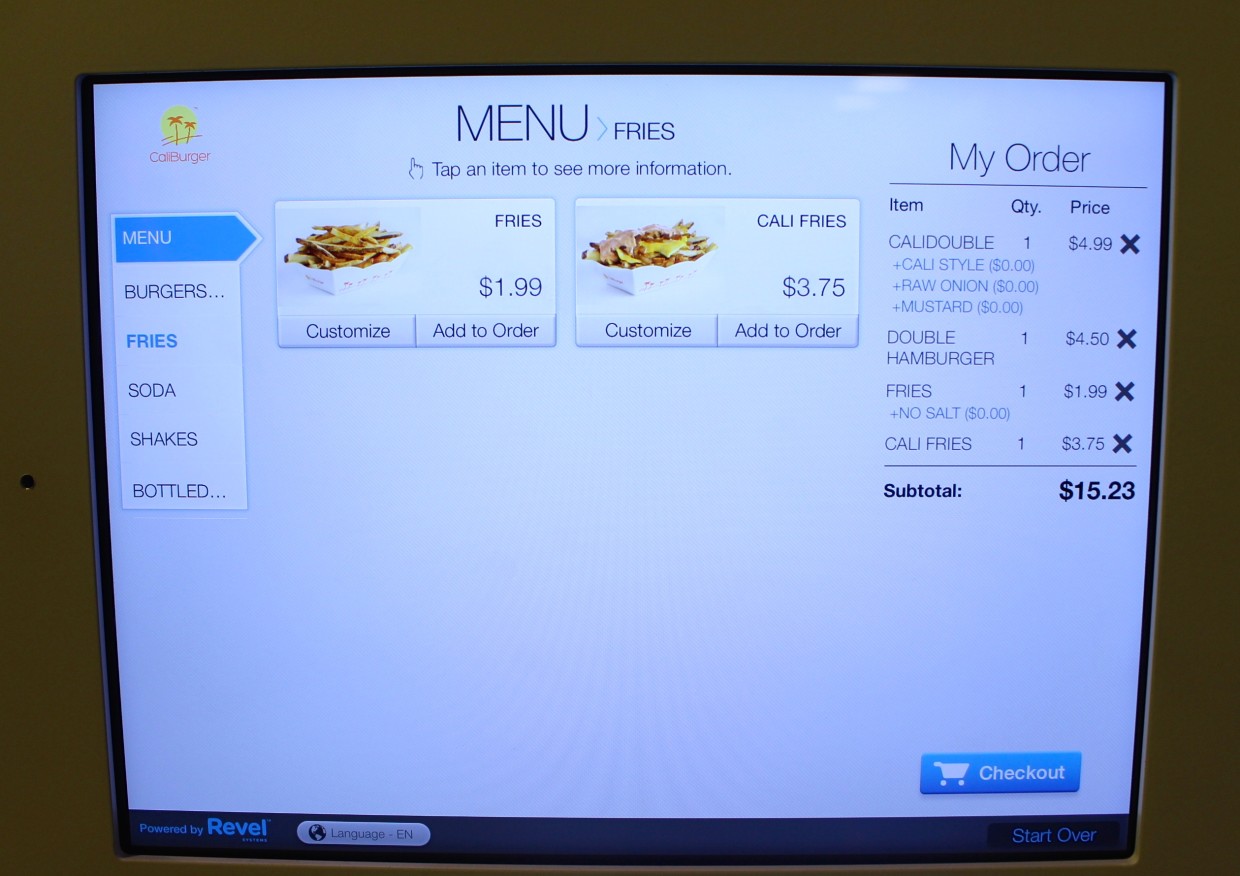 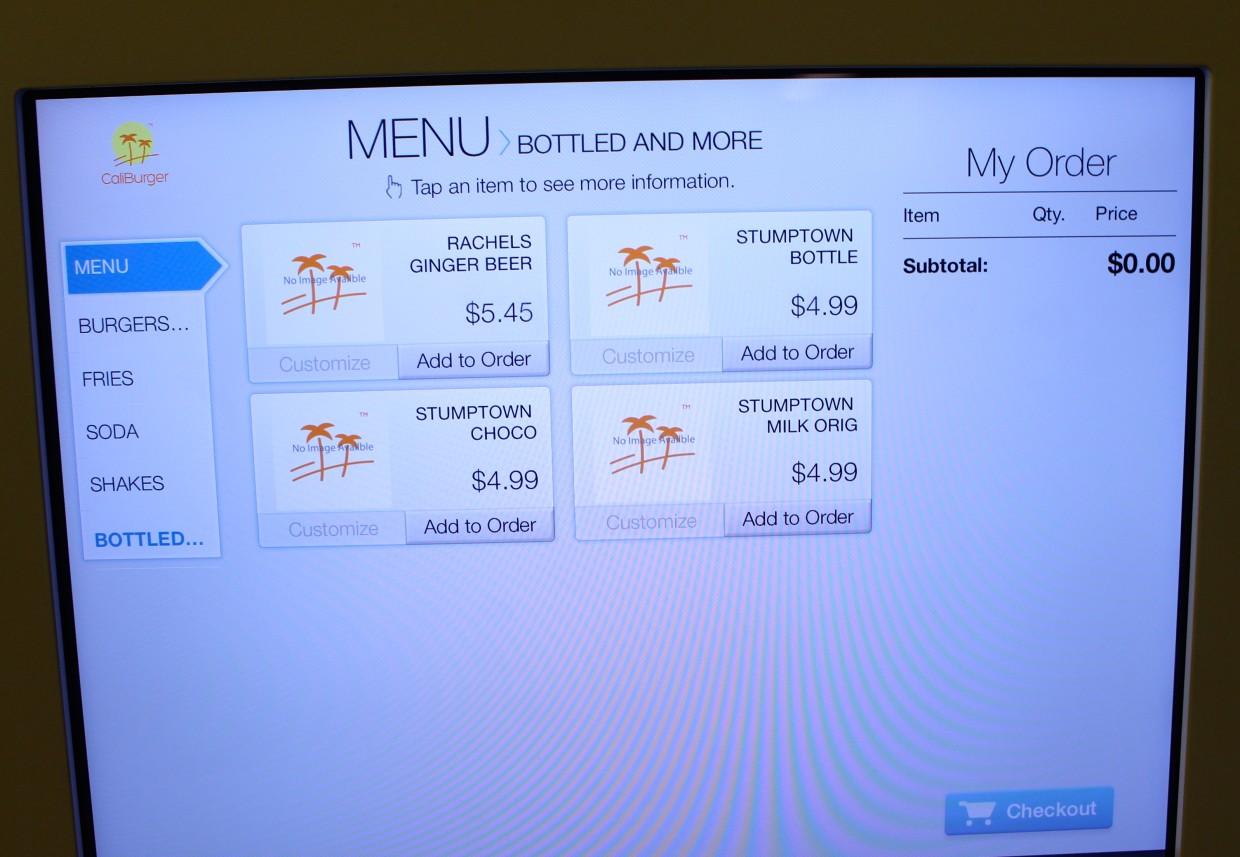 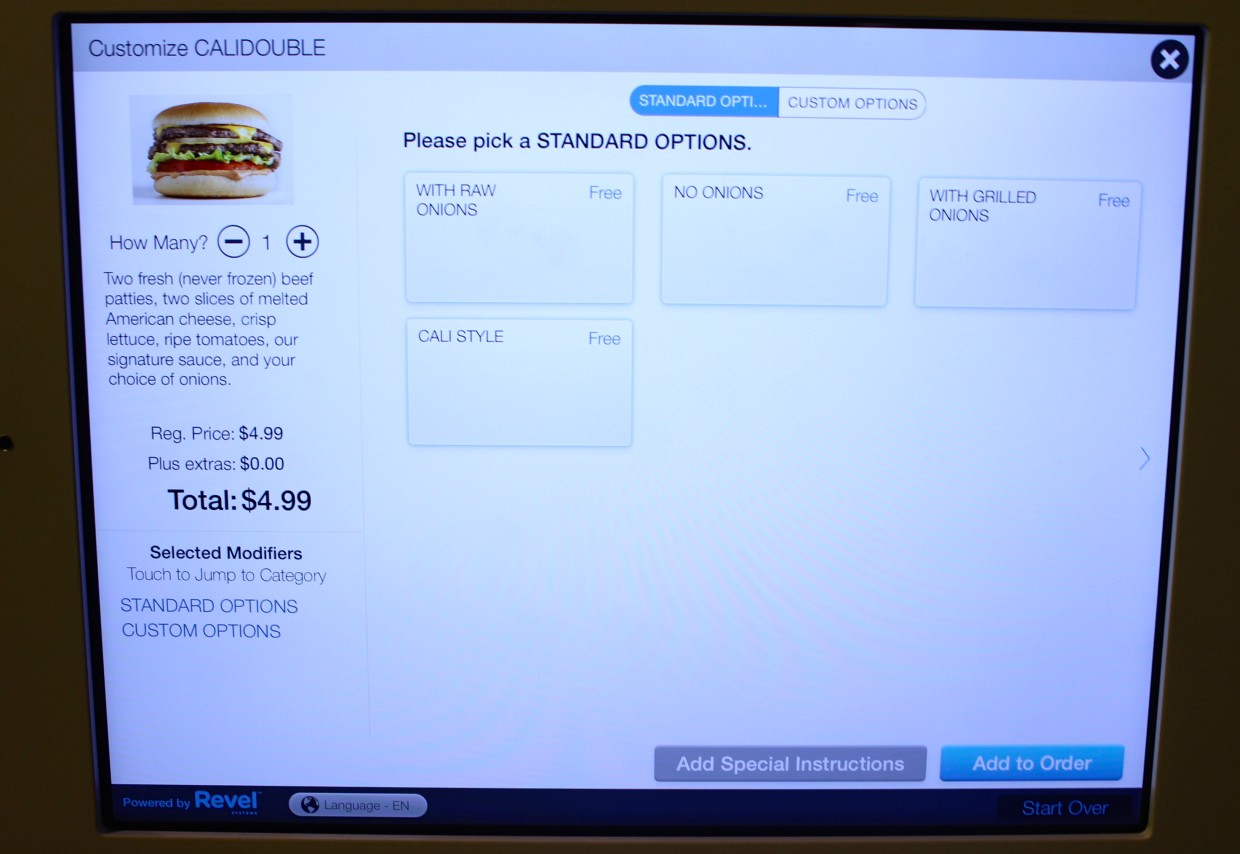 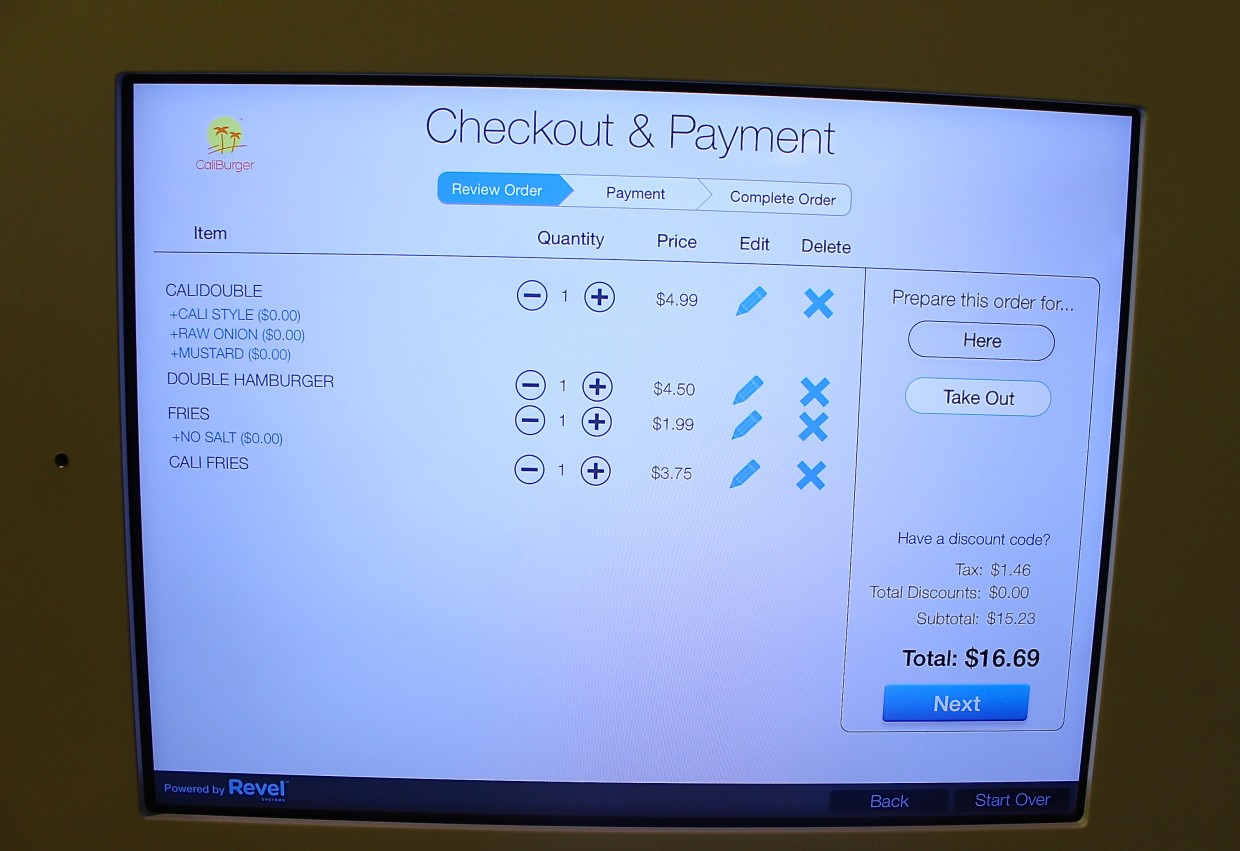 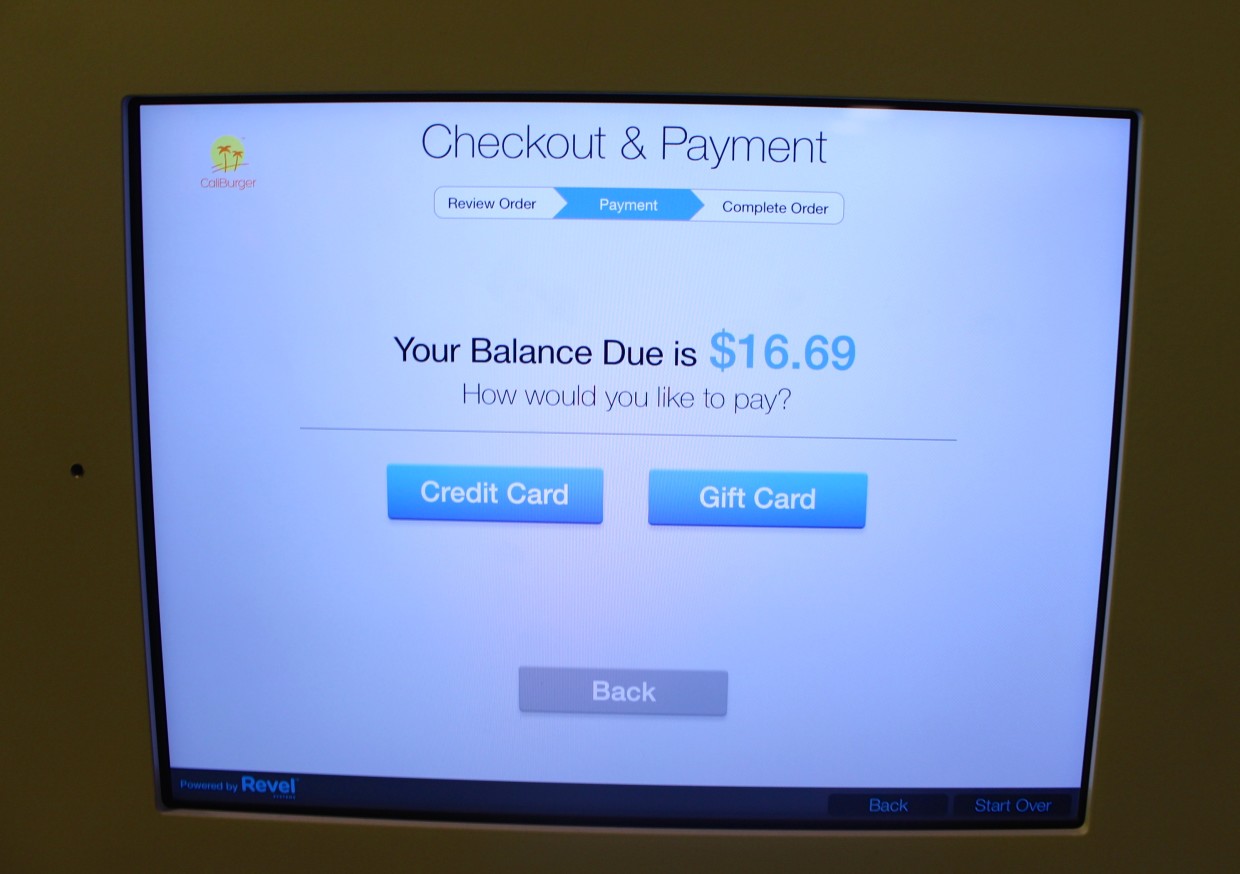 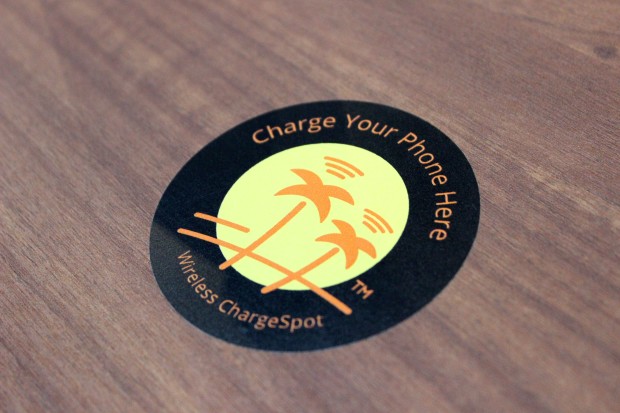 When you sit down, you can charge your phone simply by setting the device on the table. If your phone does not have wireless charging capabilities, CaliBurger provides charging cords.

But the most interesting tech-related aspect is the fact that you can play Minecraft on your own device and compete against up to 50 other customers inside the restaurant, with a third-person overhead view of the game and leaderboard displayed on a large screen that’s mounted on a wall.

“The mobile device pervades the life of millennials — everything is done through the phone,” said CaliBurger founder and chairman John Miller. “This restaurant is built around that concept.” 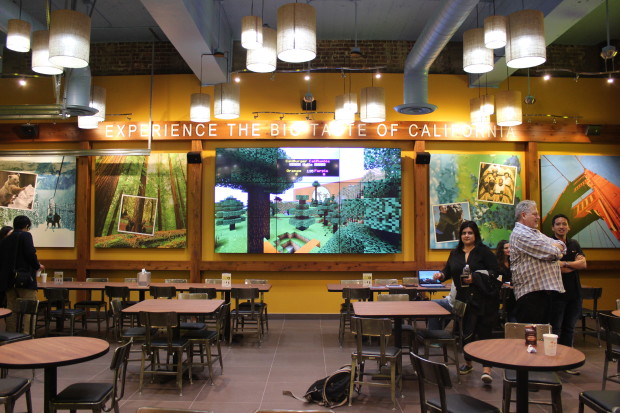 While CaliBurger has been successful overseas, there isn’t exactly much competition from international restaurants offering similar types of American cuisine. That’s why technology hasn’t really been implemented in its locations abroad.

Miller said that he knew his business needed something to differentiate it from the other U.S.-based fast-casual burger joints like Five Guys, Shake Shack, and yes, In-N-Out.

The differentiator for CaliBurger, which counts Japan-based tech giant SoftBank as an investor, is technology.

Miller said to think of this “like a space age concept for eating.” In particular with Minecraft, the uber-popular game adored by millions of youth that was acquired by Microsoft for $2.5 billion, Miller brought up his childhood experience with playgrounds at McDonalds. 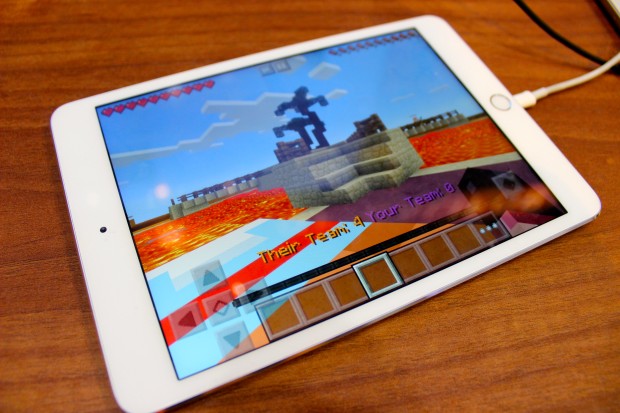 “When I was a kid and went to McDonalds, I played on the physical playgrounds — that’s why I fell in love with McDonalds,” he said. “It was a fun experience and something to do. Today’s kids need a virtual playground, something they can do with their devices and be able to link together with other kids in the restaurant.”

There are plans to develop more games that people can play together inside the restaurant — for example, a card game directed toward older customers is one idea.

Miller also noted that the Seattle store, CaliBurger’s first in the U.S., is the company’s “technology showcase.”

“The plan is to roll out the technology here and move it globally,” he said.

As far as the comparisons to In-N-Out, the famous California-based burger shop that opened in 1947, Miller said that the trademark dispute “has been resolved.”

“Our focus going forward is to really build a brand built around a different experience here in the U.S.,” he added. 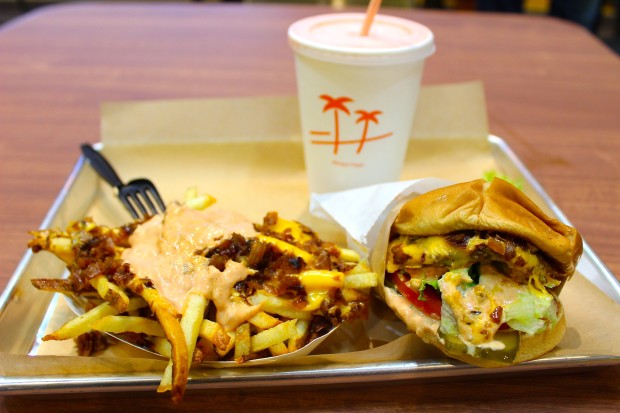 Oh, and we can’t forget about the food. I started off by sipping a strawberry shake that was spiked with a shot of bourbon. It was excellent.

Then came my entree, the “CaliBurger,” which included one beef patty, American cheese, lettuce, tomato, and special “Cali sauce.” I also asked for my burger to be “Cali Style,” which is not listed on the menu but adds melted cheese and grilled onions to burgers or fries. This is very similar, if not essentially identical, to In-N-Out’s “Animal Style” addition that’s on the “secret menu.”

Every bite of the burger was awesome and immediately brought back memories of In-N-Out, which I’m a huge fan of. The meat was well-seasoned and juicy, the veggies were crisp, and the “Cali sauce” was on point. My only complaint was the plain lackluster bun, which didn’t offer much other than something to hold the burger together.

The fries, which I had done “Cali Style,” were flavorful and crisp. In fact, they were better than the potatoes I remember eating at In-N-Out.

The menu also had some local flavors, including Stumptown coffee, Rachel’s Ginger Beer, and Full Tilt ice cream — this was a nice touch that Seattleites will appreciate.

My CaliBurger experience, from purchasing to eating to hanging out at the restaurant itself, was fantastic. Coupled with all the technology at the restaurant, along with its proximity to the UW, I’m expecting this new geeky burger shop to be quite popular.