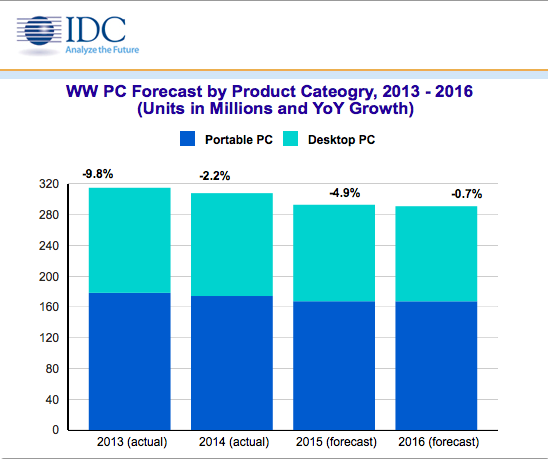 Bad news, computer makers: IDC announced today that it predicts shrinkage in the PC market in both developed and developing countries this year. PC shipments are expected to shrink by 4.9 percent in 2015, which is a deeper decline than the 3.3 percent the firm previously predicted. 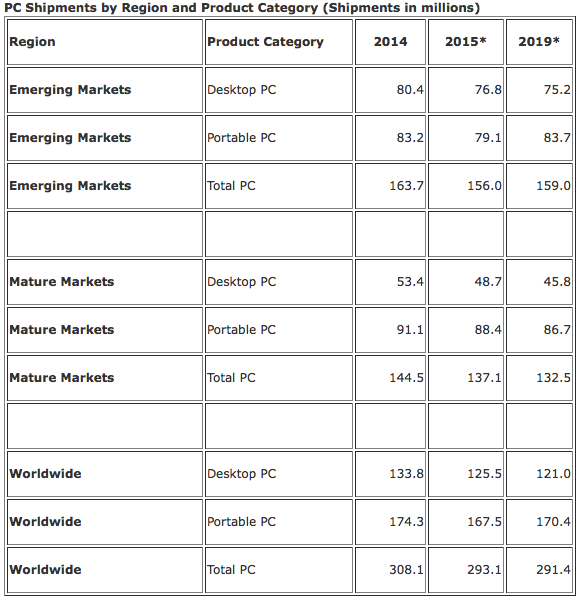 That drop in unit sales comes with a corresponding drop in revenue for manufacturers. PC market revenues were $201 billion in 2014, and IDC expects the total market revenue will drop by 6.9 percent over the course of this year. That highlights one of the key squeezes in the computer market today: manufacturers are facing decreased unit sales, as well as decreased revenues from the computers that they are selling.

Part of the projected sales decline has to do with the launch of Windows 10, since people will likely be holding off on new computer purchases until after Microsoft releases its new operating system.

There’s still a glimmer of hope for the market overall – shipments in developed markets increased by 8.4 percent in 2014, the first growth year for the market since 2010. Sales in emerging markets are expected to see growth by 2017, though IDC predicts that total sales will remain below 160 million units through 2019, down from 163.7 million during 2014.

The market may also be helped by declines in the tablet market. While the rise of the iPad and other tablets helped displace traditional PC sales, growth in that market has tapered off over the past year. It seems pretty clear that the tablet – at least for now – won’t eat the entire PC market for lunch.