Baseball has always been a sport with an immense amount of statistics. Thanks to some advanced technology, we’re about to see a whole lot more.

During the Cardinals vs. Nationals game on Tuesday, Major League Baseball debuted Statcast, a hi-tech system that uses radar equipment and HD optical cameras to measure every single play during a baseball game.

#Statcast at work on @MLBNetwork during a @GioGonzalez47 pitch. pic.twitter.com/e24iHZ2oqC

Want to know the exit velocity of another Nelson Cruz home run? How about the degree of spin on that Felix Hernandez sinker? Or perhaps the acceleration of an outfielder who just made a fantastic diving catch?

All this information is now quantifiable thanks to optical cameras and radar tracking set up in all 30 MLB stadiums. Teams are already using the data, but now it will now be shared with fans on TV broadcasts starting with Tuesday’s game on MLB Network.

MLB said that the technology, which costs tens of millions and was built specifically for the league, will be used on more broadcasts later this season, including those televised by FOX, ESPN, Turner, and local channels.

#Statcast equipment in place at Nationals Park. Watch the technology at work during Cards-Nats on @MLBNetwork, 7 ET. pic.twitter.com/z8P6JaChU5

MLB started testing Statcast, which is powered by Amazon Web Services, last year during the All Star Game and playoffs. You can check out numerous examples here. 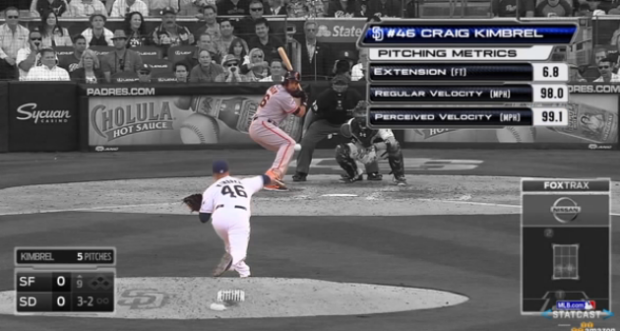 Check out how Statcast measures how hard Cruz’s game-winning single on Sunday was hit:

The roots of MLB’s in-game tracking technology goes back a decade, when the league started measuring the location of each pitch and then packaged that information for its digital platforms. Today, you’ll see strike zone boxes on TV broadcasts with pitch location, helping fans see exactly where a pitch ended up.

The MLB isn’t the only league looking to track movement. You can expect to see something similar with the NFL soon, as the league continues working on its Next Gen Stats initiative, which will surface innovative new statistics for fans and media.

Here are the new stats the MLB will be tracking (via MLB):

Exit velocity: Velocity of the ball off the bat on batted balls.
Launch angle: The vertical angle at which the ball leaves the bat on a batted ball.
Vector: Classifies the horizontal launch direction of the batted ball into five equal zones of 18 degrees each.
Hang time: Measures the time from bat contact to the ball either hitting the ground/wall or contact by a fielder.
Hit distance: Calculates the distance on the ground of the actual landing point of any ball hit into play, ground/wall or contact with fielder, regardless of outcome.
Projected HR distance: Calculates the distance of projected landing point at ground level on over-the-fence home runs.