NEW YORK — Microsoft announced its first-ever laptop, dubbed the Surface Book, in a surprise move on Tuesday. The company says the launch was all about creating a new device category, and after holding it in my hands I’m inclined to agree.

The Surface Book isn’t a tablet that can replace your laptop. It’s both a tablet and laptop simultaneously.

Watch the raw footage from some of my time with the Surface Book to see it in action.

As a laptop, the device functions about like you would hope. The keyboard is quieter than the Macbook Pro I’ve been using, but otherwise I wouldn’t say it’s any better or worse. The keys are spaced nicely and the touchpad is completely on par with everything we’ve seen from other high-end laptops before.

The device boasts a 13.5 inch diagonal screen, and the company calls it the fastest laptop of that size ever made. It’s two times faster than the MacBook Pro, the company says. It comes in a metallic case, weighs 3.34 pounds, is advertised at 12 hours of battery life and has a 5 megapixel front-facing camera and 8 megapixel in the back. Storage options start at 128GB and go up to 1TB. It’s also available with 8GB or 16GB of RAM. 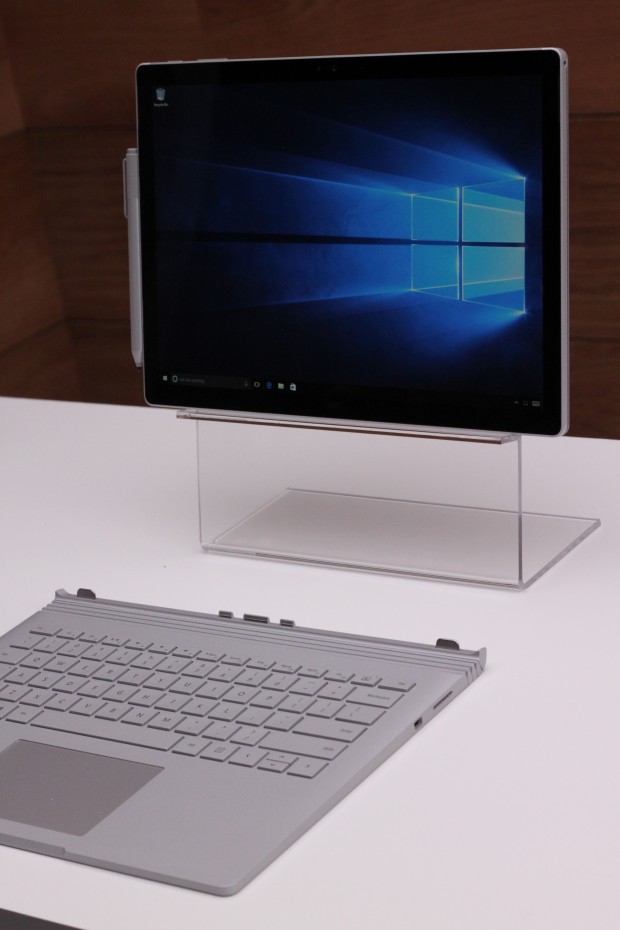 But the real magic starts when you detach the screen from the keyboard. We’re told some of the processing power is in the base, but there’s plenty in the top half to use it just like a tablet for things like  running apps and browsing the web.

Granted the model I was playing with was brand new, but the connection seemed quite sturdy. There’s a button on the keyboard you press to detach and then pull the screen from the corner. It takes a little tug to pull apart, but nothing unreasonable.

The device then goes into tablet mode, reorienting the screen. It ships with the same pen used with the Surface Pro 4, and it felt smooth when I tried it out.

From what I can tell after my brief time with the Surface Book, it seems to do everything you would expect from a PC and tablet. We’ll have to run it through more rigorous testing when the device hits shelves on Oct. 26, but early signs are looking good.

The only downside I can see at this point is that the Surface Book is going to start at $1,499, which is more than enough to buy a decent laptop and tablet separately. If you load it with all the goodies, the price can climb as high as $2,699. But I guess that’s the price you pay to have the latest gadget around.

Update: This post was updated to include more technical specs.