Google has started to target rogue restaurant websites linked to the OrderAhead delivery service — penalizing the unauthorized sites in search results, removing them from restaurant profiles in Google Maps, and revoking the “verified” status on Google Business restaurant listings that connect to the OrderAhead sites.

Hear GeekWire's Todd Bishop discuss this story Monday in the noon hour on The Record on KUOW, 94.9 FM in the Seattle region, and kuow.org.
The crackdown, which follows a series of reports by GeekWire about OrderAhead’s online tactics, promises to help restaurants across the country combat what amounted to widespread online impersonation by thousands of OrderAhead sites.

Google has started the crackdown in just the past few days, based on numerous changes we’ve seen for restaurant searches across multiple states. For example, this was the Google search results page as of last week for Cafe Turko, one of the restaurants highlighted in GeekWire’s coverage of the topic. 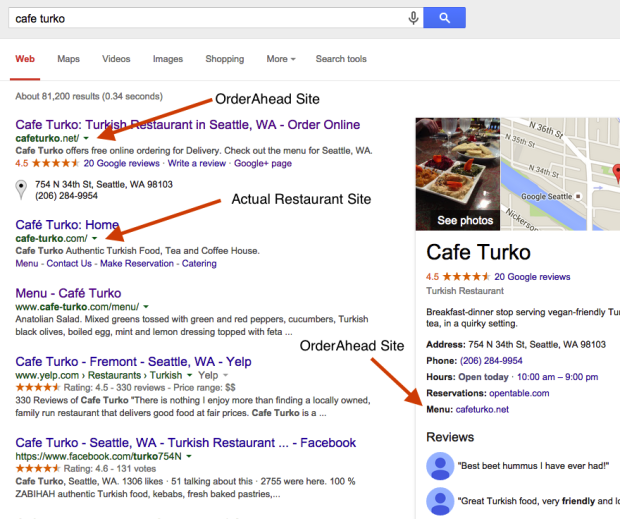 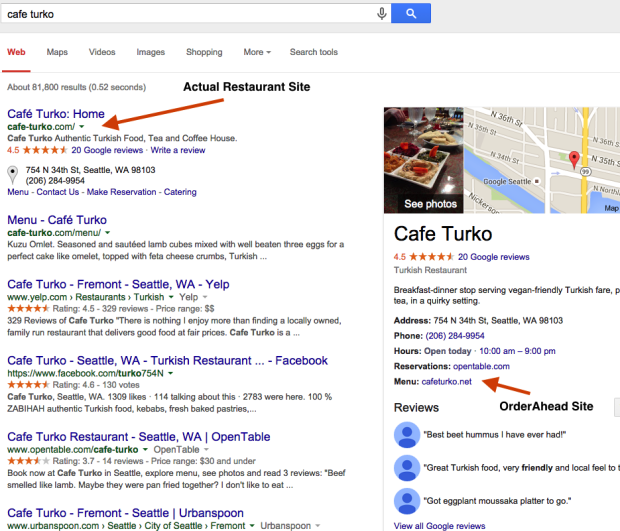 However, the crackdown is incomplete so far, possibly hampered in part by the wide variety of domain name owners and hosting providers used by the OrderAhead sites.

For example, in the case of Cafe Turko, the unauthorized site does still appear in the Knowledge Graph pane to the right of the algorithmic results, as shown in the first screenshot above. The rogue site also still appears in Cafe Turko’s Google+ page, tied to its Google Business listing, but the verification of that listing has been taken away in just the past few days, making it easier for the restaurant to associate the listing with their actual site.

Restaurants whose listings are still being hijacked should start by trying Google’s phone support options to fix their listings, according to search-engine optimization experts who have been following this story. 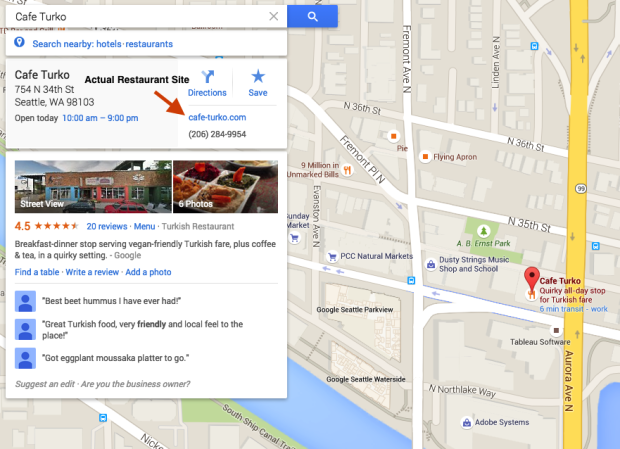 We’re seeing numerous examples like this in various states, based on the restaurants we’ve been tracking. We first noticed changes taking place on Friday, and they continued over the weekend. Other examples include Mel’s Market, Green Leaf Vietnamese and Wild Ginger, which were among the restaurants highlighted in GeekWire’s coverage.

OrderAhead is a graduate of the prestigious Y Combinator startup accelerator, with a roster of high-profile Silicon Valley investors. Founded in 2011, the company has landed a total of $10.5 million in funding from backers including Salesforce CEO Marc Benioff, Google executive chairman Eric Schmidt, Reddit co-founder Alexis Ohanian and Ignition Partners.

Even with those big-name investors, the company faces big challenges and pressure to break through in a highly competitive market. OrderAhead got its start by letting people order ahead for takeout, before expanding into food delivery, where it’s battling a long list of heavily funded rivals: Caviar, Munchery, SpoonRocket, Peach, Lish, FoodPanda, Plated, Bitesquad, Postmates, Yelp-owned Eat24, GrubHub, and many more.

OrderAhead has declined our repeated requests for comment. A GeekWire reporter who visited the company’s San Francisco headquarters was told by an employee that they “can’t just have people coming around here” asking questions.

“I don’t want to condemn the new model, but what we do need from these emerging businesses is some ethical guidelines and clear best practices,” he said. “It is never OK to use someone else’s brand, art and business, without their permission, for your own benefit. For us, this was a line that was clearly crossed in this case.”