GeekWire is going to China.

In less than two months, I’m headed to the Far East for what should be an incredible experience reporting on the technology scene from the world’s most populous nation. 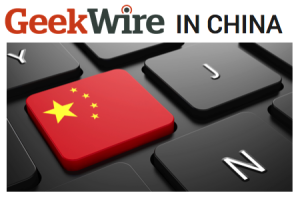 We’ll be visiting companies big and small, meeting with entrepreneurs and executives in Shanghai and Beijing to get a feel for how massive and fast-growing the tech industry is in China. We’re also looking forward to connecting with fellow Seattleites at the University of Washington Innovation Summit, where top innovators from the university and Microsoft President Brad Smith will be speaking in Shanghai.

The trip comes at a fascinating time for U.S.-China relations and particularly within the technology industry, as tension between both governments grow over technology protectionism and other tech-related policies.

China and the U.S. are also reportedly in talks for what’s being described as “the first arms control accord for cyberspace,” in which each country would commit not to use cyber attacks to strike the other’s infrastructure during times of peace. On top of all that, China’s slumping economy is having ripple effects across the world’s markets.

Those topics will be top of mind this week in Seattle, where China President Xi Jinping and fellow Chinese dignitaries will make a stop in the Emerald City before meeting with President Barack Obama at the White House in Washington D.C.

On Wednesday, President Xi is scheduled to visit Microsoft’s headquarters in Redmond, where the eighth annual U.S.-China Internet Industry Forum will take place with a guest list that includes execs from U.S. companies like Apple, Facebook, Uber, and Google, in addition to Chinese giants like Baidu and Alibaba. Topics at the event are expected to include cloud computing/big data, the upcoming generation of Internet users, international cooperation and other issues.

U.S. tech leaders will be striking a delicate balance during his visit, seeking to ensure long-term access to the lucrative Chinese market, while grappling with government censorship and challenges with cyber attacks and intellectual property theft believed to emanate from China.

We’re excited to not only track the president’s visit to our hometown of Seattle this week, but then travel to his home country less than two months later in mid-November. We hope to offer readers perspective on the booming tech economy in China and how that directly relates to the industry here in the U.S.

We are open to any recommendations or advice for our trip, so feel free to email me at taylor@geekwire.com with story ideas.