Sci-fi is in the spotlight. The genre has emerged from fringe to mainstream with blockbusters like Interstellar, The Hunger Games and J.J. Abrams’ Stark Trek reboot.

The sci-fi community also endured a loss last month. Leonard Nimoy, who played the iconic Spock on the original Star Trek, passed away at 83.

In celebration of Nimoy, Star Trek, and the science fiction tradition, EMP is hosting a special exhibition later this month. Infinite Worlds of Science Fiction will display over 150 artifacts from sci-fi television shows and movies.

“From Back to the Future and Ghostbusters, to Battlestar Galactica, Star Trek, and Blade Runner, Infinite Worlds of Science Fiction invites you to experience the creative range in storytelling and the unlimited imagination that spawns fictional worlds with 150+ artifacts from iconic films and television shows,” notes the EMP.

To kick off the exhibition on March 28, the EMP is hosting a special launch party. George Takei, best known for his portrayal of Mr. Sulu on Star Trek, will be speaking and holding a Q&A session. The event will also have photo opportunities with the Star Trek command chair, science fiction trivia, and the debut of Ninkasi Brewing Company’s Space Beer.

That’s one of the selections from the GeekWire Calendar, our curated list of the Pacific Northwest’s top tech events. Keep reading and visit the full calendar for more.

Behavioral Design 101: The Science of Changing What People Do

One of the tallest orders for startups is user adoption. Creating a great product is important, but it won’t get you very far if you can’t get anyone to use it. And, in the case of many tech startups, adoption means changing people’s behaviors. General Assembly, in partnership with Microsoft Ventures, hopes to demystify that challenge during this class. Microsoft Behavioral Scientist Matt Wallaert will lead the discussion, followed by a Q&A session. RSVP for free here.

Norwescon, one of the largest regional sci-fi and fantasy conventions, is returning with some big name headliners. This year’s guest of honor is George R.R. Martin, author of the Song of Ice and Fire series that inspired HBO’s Game of Thrones. Julie Dillon, an artist who specializes in the genre and reps from Random House, will also be speaking. Programming includes educational panels, a writer’s workshop, a cosplay masquerade, and more. Tickets are on sale for $70 here. 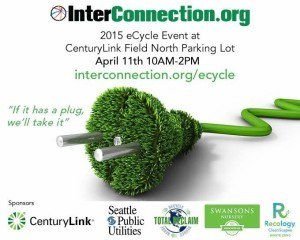 InterConnecton.org and CenturyLink are hosting this large-scale electronics collection just in time for spring cleaning. If you have old gadgets laying around, drop them off at eCycle where they’ll be refurbished for charitable use. The collectors promise to take “anything with a plug.” 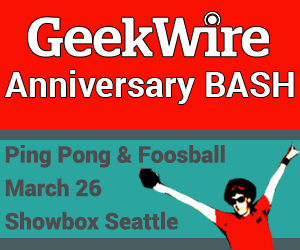 The GeekWire Bash is a unique setting to mix and mingle with hundreds of key members of the Seattle tech community. Get your tickets today!