Sales of PCs took a significant hit during the first quarter of 2015, according to new reports from Gartner and IDC, but the research firms say that’s not necessarily a cause for concern. According to Gartner, sales worldwide sank by 5.2 percent year-over-year, while IDC reported that sales dropped by 6.7 percent year-over year.

That’s in line with predictions from earlier this year made by both firms that PC sales would decline in 2015. Part of that has to do with heavy sales in 2014 as companies replaced computers running Windows XP with newer devices. The biggest drop came from desk-based PCs, but laptops and other portables continued to show promise. 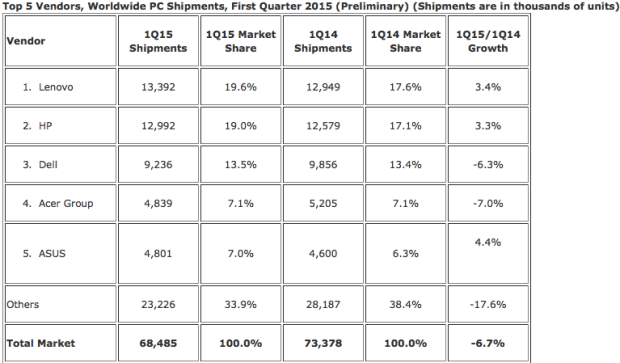 “Mobile PCs, including notebooks, hybrid and Windows tablets, grew compared with a year ago,” Mikako Kitagawa, a principal analyst at Gartner, said in a press release discussing the firm’s findings. “The first quarter results support our projection of a moderate decline of PC shipments in 2015, which will lead to a slow, consistent growth stage for the next five years.”

The drop in PC sales will have a negative effect on Microsoft’s business. Nomura equity analyst Rick Sherlund said in a note that Microsoft’s revenue from Windows OEM sales and Office will likely be lower for the first half of 2015 compared to the same period a year ago because of the Windows XP sales bump in 2014. Sherlund expects that the company’s Windows OEM revenue for the first quarter of this year will decline by 20 percent year-over-year.

As for individual manufacturers, IDC and Gartner both agree that sales of Lenovo and HP computers bucked the overall trend and grew during the quarter. In the U.S., IDC estimates that Lenovo sold more computers than Apple, and took the third spot in terms of market share. Gartner was more optimistic about Apple’s sales, projecting that the Cupertino-based company held on to its third place slot in the U.S.