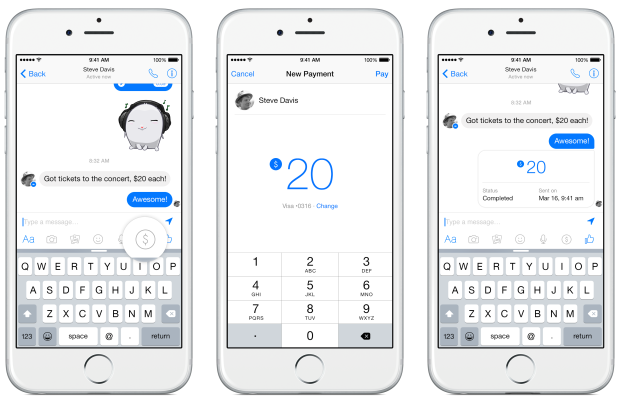 People who owe their friends a few bucks after a night on the town have a new way to get the money back to them. Facebook announced today that it will start letting people send money to their friends through its Messenger chat app on iOS and Android, along with the company’s desktop messaging service.

Facebook’s system works similarly to other friend-to-friend money transfer apps like Venmo and Square Cash. Users tap the “$” icon in a conversation with one of their friends, enter their Visa or MasterCard debit card information (if it’s their first time making a transfer) and then enter the amount that they want to send. After that, users just tap the “Pay” button, and their recipient will get the dough – though they may have to enter their debit card details, first.

Users who are concerned about the security of their payment details can set the app up to require a PIN every time they send money. People who have an iPhone with a Touch ID sensor can also use their fingerprint in lieu of a PIN. Here’s a video that shows how it all works:

The social networking company is powering the service with its own payment processing technology. Facebook developed it in order to handle virtual currency for games played on its platform, and it’s now repurposing that same secure infrastructure for peer-to-peer payments rather than partnering with a third-party payment processor like PayPal to handle the transactions.

It’s likely people won’t get the service right away. Facebook says that it will be rolling out “in the coming months” in the U.S. In other words, don’t expect this to be your method of squaring up a St. Patrick’s Day bar tab.

The news comes five months after code surfaced inside the Messenger app that showed the company working on a mobile payment push. Since then, Snapchat got into the mobile payment business with its own Snapcash product, powered by Square Cash.