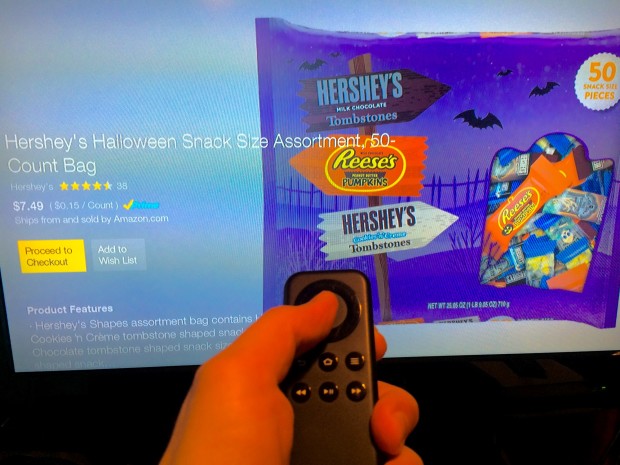 Last night, with just a few clicks of an Amazon Fire TV Stick remote, I bought a Hershey’s Halloween Snack Size Assortment 50-Count Bag of candy via my TV screen, for delivery to my house — without touching my phone or computer. This morning, the Amazon-powered TV interface was offering a Fitbit Charge for purchase in the same way, perhaps to help work off those extra calories.

Is this all part of Amazon’s master plan? The answer is yes, but in a much bigger way than one person’s candy and exercise habits. 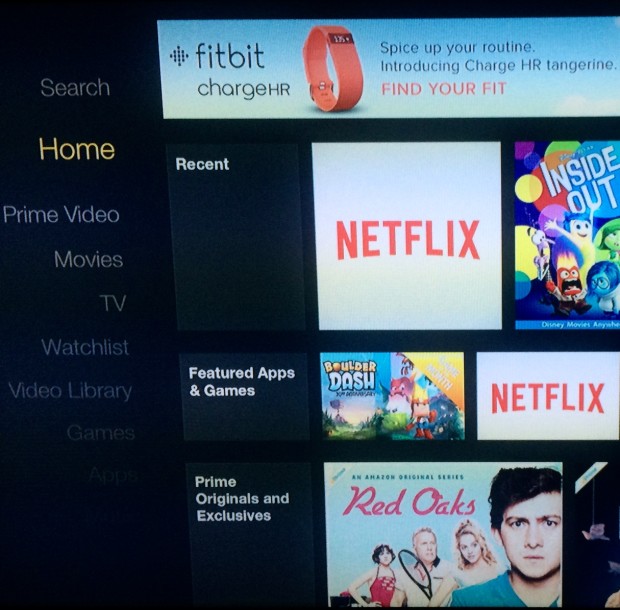 Amazon has quietly rolled out e-commerce functionality on its Fire TV devices, the first step in a broader plan by the tech giant to integrate online shopping and product placement into the on-screen television experience. The test began two weeks ago, and is performing above expectations so far, according to a source with knowledge of the situation.

Next up: GeekWire has learned that Amazon is developing its own shopping channel, like QVC but with the ability to purchase products directly from the screen. That channel is expected to roll out next year.

The company has been hinting at this plan with early online video projects, potentially leveraging technology from its acquisition of the Twitch video streaming service.

In addition, Amazon is looking to integrate products into its X-Ray feature, which currently leverages Amazon’s IMDb subsidiary to display details about shows such as the actors and music. Product integration with X-Ray will let viewers see specific items in a movie or TV show, and then click to easily purchase those products for themselves.

The strategy demonstrates one benefit of Amazon’s far-reaching business, as the company leverages its massive presence in e-commerce to make more money through its consumer devices — something that rivals like Google, Apple and Roku wouldn’t be able to do as effectively.

For now, TV-based shopping has been rolled out to Fire TV and Fire TV Stick users via banner ads on the Fire TV home screen, which have been used primarily to advertise Amazon shows and other content in the past. In addition to Hershey’s candy and Fitbit devices, the product ads currently offer the ability to browse and purchase children’s toys from Mattel. 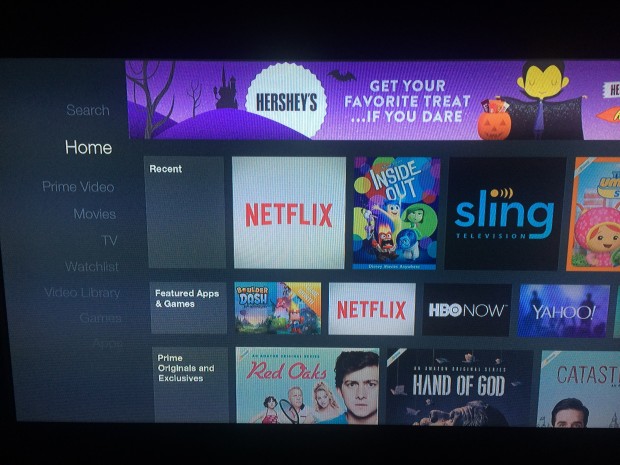 Buying that bag of candy took three clicks — one click on the ad, a second click to proceed to checkout, and a third to complete the purchase with my stored credit card, for free delivery to the primary address on file with my Amazon Prime account.

The feature also offers the ability to browse product images and read customer reviews, but if you simply want to buy the chocolate, it’s literally a few clicks away. 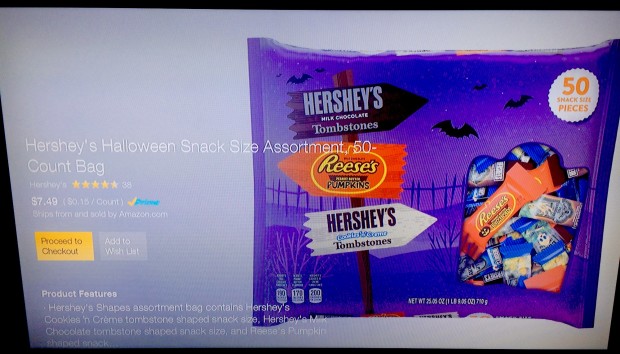 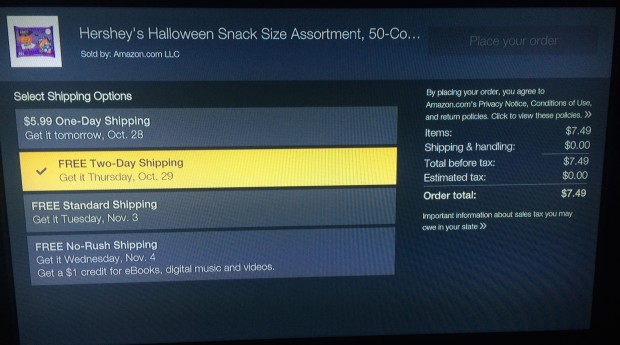 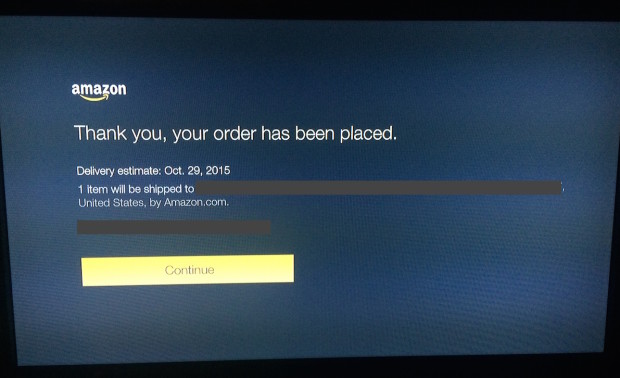 Here’s where it starts to become clear that Amazon has been laying the groundwork for this feature for a long time. Because the Fire TV devices are linked to users’ Amazon accounts, e-commerce functionality can be seamlessly integrated into the television experience. And free Amazon Prime shipping makes the purchasing decision that much easier for Prime members.

In fact, it would be easy to quickly spend more money buying products on the Fire TV than you spent on the Fire TV itself. (The Fire TV stick starts at $39.99 and the Fire TV box sells for $99.99) In that way, the strategy is the on-screen manifestation of the “Amazon Doctrine,” as explained by Jeff Bezos: “We want to make money when people use our devices, not when they buy our devices.”

However, the shopping feature is in still in its infancy. For one thing, without a dedicated shopping portal, I was forced to wait until the banner surfaced randomly again if I wanted to buy a second bag of candy, check out the Fitbit, or browse the Mattel toys I had seen earlier. 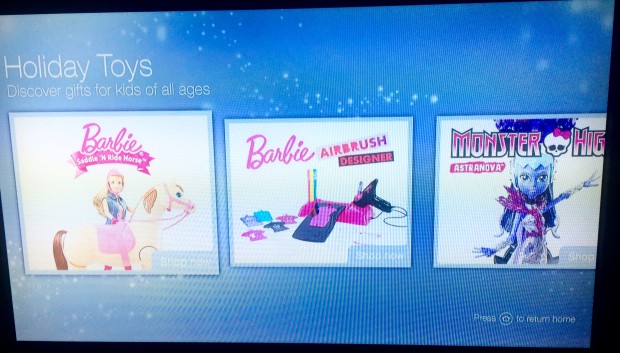 A report this week by the site AFTV News cited an anonymous source saying that Bezos postponed the rollout of a full-fledged Fire TV shopping portal after seeing a demo, because it didn’t include shopping cart functionality. Last July, the same site reported that Amazon planned to roll out shopping on the Fire TV devices, and as we’re now seeing, that report is proving accurate.

For now, the lack of a shopping cart means users need to buy products one at a time on Fire TV, without the ability to add several items to a shopping cart for a collective purchase on the device. However, you can use the Fire TV to add a product to an Amazon Wish list for purchase later on a phone or computer. 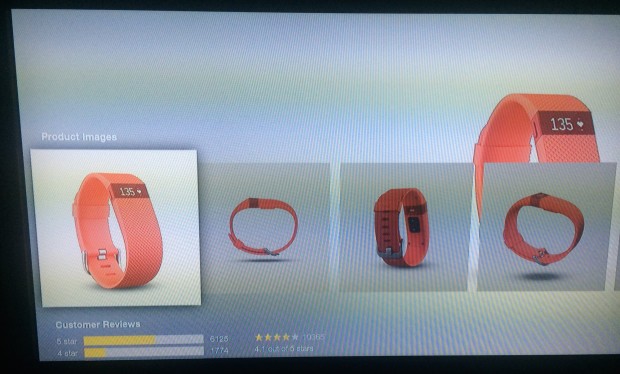 What about Prime Now? The company’s new one-hour delivery service isn’t yet available as an option through the Fire TV. Delivery choices for now are limited to the standard selections available through Amazon’s website, including free two-day shipping and $5.99 one-day shipping for Prime members.

But it’s easy to envision a day when you’ll be able order items through the TV and have them show up while you’re watching the next episode of your favorite show.

From there, it’s not hard to imagine seeing a pair of shoes in your favorite show, clicking the remote to buy them, and having them show up before the episode ends. And that’s where Amazon’s larger plan suddenly doesn’t seem so far away.