Now that David Stern is retired from his perch atop the NBA, it looks like he’s doing a bit of investing.

The former NBA commissioner participated in a $5 million financing round for AlphaDraft, a fantasy eSports startup that runs daily and weekly contests for cash and prizes, TechCrunch reported today.

The Los Angeles-based company is similar to other popular fantasy sports websites like DraftKings and FanDuel, but is geared toward the eSports gaming world versus real-life competition. AlphaDraft lets users compile a team of the top individual gamers and win prizes based on who put together the best lineup.

Fortune notes that AlphaDraft will pay out at least $5 million in cash prizes and have 1 million users by the end of this year. The company also raised money from Melo7 Tech Partners, the firm created by NBA star player Carmelo Anthony.

The fantasy sports market is growing rapidly, particularly with companies that allow participants to play daily and weekly games for cash. This trend was highlighted most recently by Disney’s $250 million investment in DraftKings and FanDuels’ $70 million round this past September. 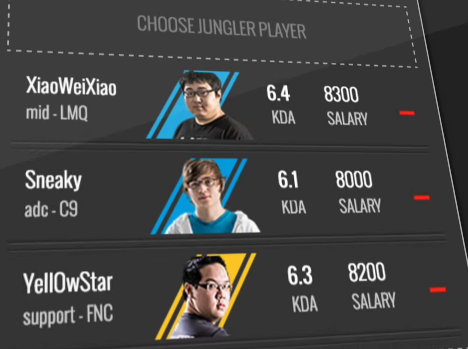 Now we’re seeing a similar pattern play out in the eSports industry, which is also growing with both players who win huge cash prizes and the millions of people who enjoy watching gamers compete online. Even ESPN is now broadcasting the action, too.

Along with companies like AlphaDraft and Vulcun, which raised $12 million last month and also runs fantasy eSports leagues, there are other new entrants looking to grow a business in the eSports market. For example, former general manager of Microsoft Ventures Rahul Sood recently launched Seattle-based Unikrn, which is building a brand new online gaming arena where spectators will be able to watch and chat about major tournaments — and place bets for a chance to hit the jackpot.

Here’s more on how AlphaDraft works: