LAS VEGAS — The sensors have arrived, and they want you to keep your hands out of the cookie jar. 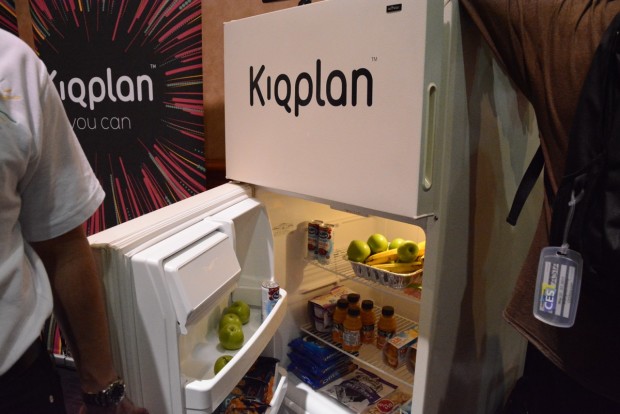 The makers of the Kiqplan fitness app are showing how the app will receive notifications from Samsung SmartThings sensors placed in refrigerators and cookie jars to remind users with messages like, “Are you sure you want that cookie?” and “Make sure to pick something healthy” when the sensor detects that the fridge or jar has been opened.

It’s part of a broader effort by the company to help users not only track their activity but also reach their goals, said Paul Landau, the CEO of Fitbug, which makes the Kiqplan app.

The feature is slated to be activated later this year. This is the first day the company has shown the upcoming feature, and reaction so far has been split, with some people saying they would still eat the cookie, but others seeing the notification as potentially helpful.

“It’s that little nudge that makes you say, ‘You know what, I’ve had enough cookies today. Maybe I’ll have an apple instead,” he said.

Across the way, Parrot USA is showing its upcoming Parrot Pot and Parrot H2O devices, which use sensors to regulate and automatically water your plants to the optimal level, using a large botanical database, depending on the type of plant. The devices can be used with a standard water bottle turned upside down.

Pricing hasn’t yet been announced. Slated to be released later this year, the Parrot Pot and Parrot H2O are expected to sell for more than the existing $59 Parrot Flower Power plant sensor.

Sensors have been a common theme at CES in recent years, but they’re now reaching critical mass, based on the number of sensor-based products and services we’re already seeing at the show.

Shawn DuBravac, the Consumer Electronics Association chief economist, also cited the examples of sensors in everyday objects such as toothbrushes. Products that succeed will not only digitize the physical world but also influence behavior, he said during a presentation today.

“We’re in that experimentation period — does it change the way behave, does it close that loop?” he said. “And if it does, then the ramifications are pretty pronounced. It could mean that every dentist becomes a data scientist.”

Also at the show, the Humanscale office furniture company is previewing its partnership with the Detroit-based startup Tome to equip standing desks and chairs with sensors that will be able to detect how long the user has been sitting or standing, and send notifications to the user to mix it up.

The answer is not to sit all the time, or to stand all the time, but to alternate between them, they explained. The accompanying app can track how long the user has been doing each, and companies can access aggregated data to get a sense for how their overall workforce is using their standing desks.

It might sound trivial, but given the health risks associated with sedentary lifestyles and desk jobs, it’s a meaningful problem to solve, said Jake Sigal, the CEO at Tome, who sold his previous startup, Livio, to Ford. In looking for his next challenge, he decided to figure out a way to use sensors to improve health at work.

“The world has enough connected Crockpots already,” he said.

We’ll see about that. CES is just getting started.