Drones have made their way to the U.S. Open — but not in a good way.

During a tennis match at Louis Armstrong Stadium in New York City on Thursday evening, a drone flew over the court and crashed into the stands, halting play as authorities investigated the scene. 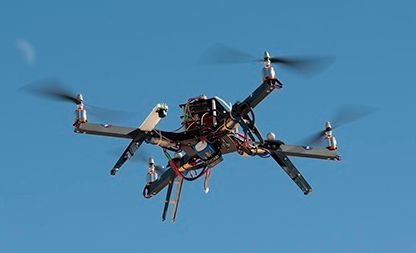 The drone did not hit any spectators and crashed upon landing. The players, though, admitted they were scared and were concerned that the device might be a bomb.

It’s yet another case of people flying drones where they shouldn’t be. In general, FAA rules for unmanned aircraft systems limit recreational use of drones “to below 400 feet, away from airports and air traffic, and within sight of the operator.”

The FAA also mandates that people don’t fly recreational drones near people or stadiums. At the Super Bowl earlier this year. the agency banned anyone from flying drones within 30 miles of University of Phoenix’s stadium.

“The incident at the U.S. Open shows how vulnerable we are to this new technology,” said Brian Edmonds, President of Dedrone, a provider of a drone early-warning and detection system. “While no one was harmed this time, that was more due to luck than to our ability to deal with this new technology.”

However, as drones become more popular — experts predict the global market for drones will climb to at least $1 billion by 2018 — many wonder if recreational laws should tighten up, particularly with incidents like this and others, like the man who crashed his drone at the White House last year or the woman who was knocked unconscious by a drone at a Seattle parade in June.

Meanwhile, the FAA is examining its existing commercial drone laws, too, particularly as companies like Amazon and Google develop drone technologies.