Recognizing that cellphones are now used for more than talking and texting, the Washington state legislature was seeking to make laws more strict by essentially banning all phone usage in the car.

But the bill died yesterday after a committee failed to vote on the distracted driving bill before the deadline.

The bill, which passed the Senate in March, would have made performing pretty much any tasks, including surfing the Internet, using maps, or checking your social networks, illegal while driving.

“A person operating a motor vehicle while holding a personal wireless communications device in his or her hand or hands…to read or manually enter data including, but not limited to, short message service, texting, e-mailing, instant messaging, or engaging in any other form of electronic data retrieval or electronic data communication is guilty of a traffic infraction,” according to language in the proposed bill.

However, the bill did leave some wiggle room, allowing drivers to make phone calls or use navigation services as long as they were hands-free. It’s already illegal in the state to talk and text. 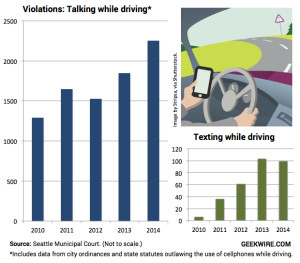 The State Patrol was in support of the bill because it found the current law difficult to enforce because it was hard to know if someone was talking or texting or using other smartphone features.

Although based on the number of citations giving annually, it doesn’t seem too hard. In a previous GeekWire story about distracted driving, we reported that officers in Washington busted 39,389 drivers for driving while texting or talking in 2013, according to The Washington Traffic Safety Commission, which had not yet gathered data for 2014.

The data doesn’t include the City of Seattle, which issued fewer than 2,000 tickets during that same time period.

However, last year, more drivers were busted for talking on the phone in the City of Seattle than in any other year since the law went into effect. In 2014, Seattle police handed out 2,249 tickets to drivers who were talking on the phone, a 22 percent jump compared to the year before, according to data requested by GeekWire from the Seattle Municipal Court.

Rep. Judy Clibborn (D), chair of the House Transportation Committee, told KomoNews.com yesterday that the bill died because there weren’t enough votes to pass it. “I think the fact that it had to be hands free was a big step for people,” she added.