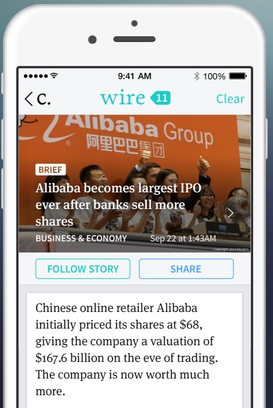 Circa News is shutting down.

The news app announced today that it is on an “indefinite hiatus” after failing to secure more funding.

Co-founder and CEO Matt Galligan penned a post on Medium today titled “Farewell to Circa News.”

“Our ongoing plan was to monetize Circa News through the building of a strategy we had spent a long time developing but unfortunately we were unable to close a significant investment prior to becoming resource constrained,” he wrote. “We could have compromised and included off-the-shelf advertisements or charged a subscription for the product but we never felt like any of the simplest solutions would pair well with the high-quality experience we wished to achieve, or even bring in enough to make a difference.”

Circa launched in 2012 as an online journalism startup co-founded by Seattle-based Cheezburger Network CEO Ben Huh. The goal was to redefine news presentation for mobile devices with apps for Android and iOS. Circa recently launched a version of its app for the Apple Watch.

Galligan said that he was proud of Circa’s accomplishments, noting that “many of the concepts that Circa News introduced to the market are being found in a number of other news outlets.”

“In a short period of time, we pioneered the use of atomized content to deliver news, ushered in a wholly new way of staying in touch with news stories over time through our story follow-ability, and proved that a small, scrappy team could go toe-to-toe with the news giants, if even for a modest audience,” he wrote.

Circa had raised around $5 million and employed 20. The company was in acquisition talks for the past few months.

I’ll have a post up shortly about our @Circa editorial staff. They’re amazing and will be a tremendous addition to your team.