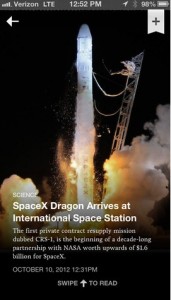 For months, Ben Huh was uncharacteristically mum about his online journalism startup. But finally today, Circa swung its curtains open in hopes to redefine the way readers consume their news.

Circa, which launched its app this morning, centers on the idea that traditional news format on a print product is a completely different beast than on mobile devices, where more and more people are getting their news from.

From the looks of it so far, the interest level is high – so much so that Circa’s servers appeared to go down for a bit this morning.

Circa isn’t going to give you full-length articles like in newspapers or on websites. Instead, the editorial team aggregates the top stories and breaks them down into “atomic units of news,” that users can swipe through.

These units of news can be anything from news facts, background info, photos, quotes, videos, etc. To find out more, users can scroll down to find more “units,” that provide more in-depth information on a given topic. 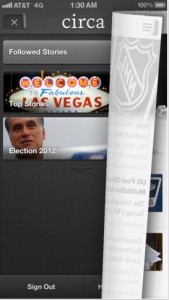 Users can bookmark these “units,” and be notified every time there are new developments with the particular story, essentially following a story as it continues to be updated.

The design seems to be really geared at people who like to scroll quickly through news on their phones while on the train or having a cup of coffee during a work break.

Another core component of Circa is to note the difference in definition between content and information, and putting more emphasis on the latter. Founding Editor David Cohn explains this further in a blog post written in May.

Huh, founder of Cheezburger Network, told GeekWire one year ago that the goal of Circa was to redefine news presentation.

“This was an idea born from my experience with Moby Dick,” Huh tells GeekWire. “But it really goes back to the orignal problems I had with news presentation. We’re essentially going back to square one and asking the question: ‘What if journalism and news was invented today?’”

Circa has 18 total investors and employs 19 staffers, 11 of which are editorial. Huh is the co-founder with CEO Matt Galligan and CTO Arsenio Santos.