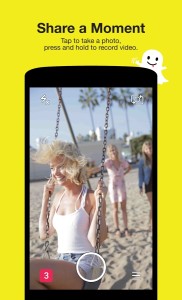 Alibaba, the Chinese e-commerce giant, is reportedly interested in investing $200 million in Snapchat, which allows people to send photos knowing that they will be erased as soon as they are viewed by others.

The round could value the company at a jaw-dropping $15 billion, according to Bloomberg, which quoted people familiar with the situation. Neither company is commenting, so details of the round could change — if or when — they ever become official, but if Snapchat does achieve that valuation, it will be five times more than what Facebook offered to buy the company two years ago.

Ever since Snachat snubbed the $3 billion offer from Facebook, its valuation has been on the rise.

Bloomberg said the talks between the Los Angeles-based company and Alibaba are separate from other fundraising initiatives, which as of last month included talks to raise $500 million at $15 to $19 billion valuation. Last year, it raised a round at a $10 billion, placing it in an elite group of private tech companies worth more than $1 billion.

Over the past several months, Snapchat has started to experiment with advertising and content deals, making it more of a media company than a social network or communications tool.