This week, Apple introduced its response to the Surface Pro 3. The iPad Pro features a lot of the functionality of the Microsoft’s professional-grade tablet, including the ability to work with a pen and power a keyboard, but falls short in some key areas. In the chart below, we compare the specs for both machines below to help determine which Pro is better for a range of situations. 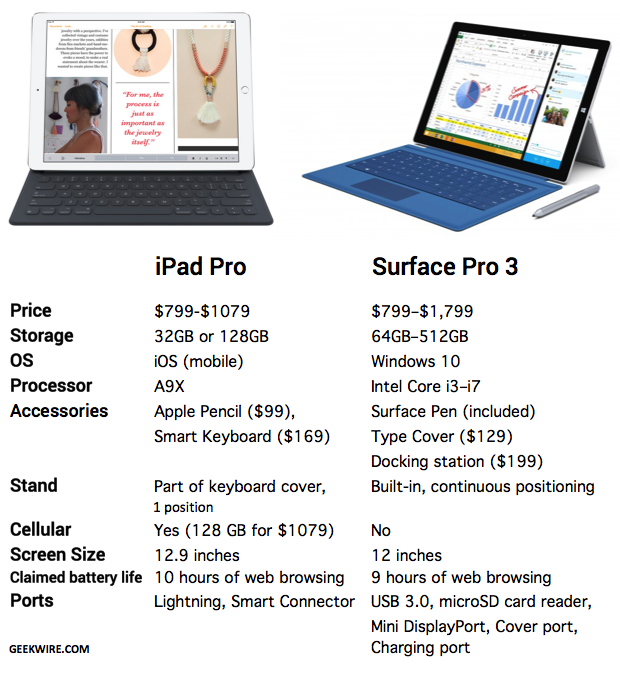 The biggest difference between the two Pro tablets isn’t on the outside. While the iPad Pro runs the same version of iOS that runs on Apple’s smaller tablets, smartphones and even the iPod touch, Microsoft’s machine runs full Windows 10, a desktop operating system that’s built with touchscreens in mind. As showcased at the unveiling, the iPad Pro will run the Office Suite, but the Surface can run anything a Windows laptop can run.

Another big difference is the ports. While the iPad Pro has a new port to connect and power a keyboard, the Surface accepts USB peripherals, microSD cards, and external displays in addition to its special keyboard port. The Surface also has a built-in kickstand, while iPad users will have to purchase a case to prop up the giant tablet.

It’s not all bad for the iPad though. The screen is almost an inch larger, and has an hour more battery life according to Apple. Users can also get a cellular connection with the iPad, which the Surface currently lacks.

It looks like the Surface is the better option if you want a tablet for work, but you may want to hold off buying one just yet. Microsoft is likely to announce a new Surface Pro for the holiday season, which will have even better features than those found on the current version. Check back in with GeekWire then for an updated head-to-head comparison of the Pro tablets.