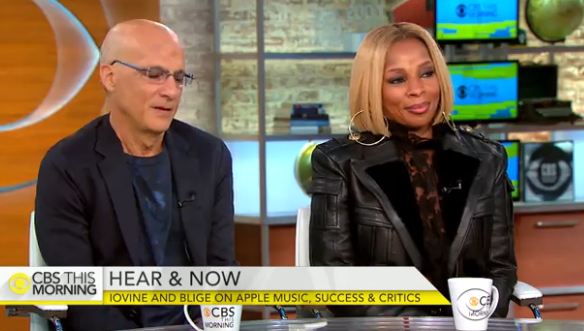 If you’re a woman, you know how frustrating it is to talk music with some guys. The presumption is, because you’re not a dude, you don’t understand music and/or need help picking out tracks.

Today, Apple Music head Jimmy Iovine, who has spent what seems like eons in the music industry and co-founded Beats Music with Dr. Dre, went on CBS This Morning to talk about Apple Music’s latest commercial — featuring Mary J. Blige no less!

Iovine starts out by telling Gayle King, Oprah’s BFF, that “streaming is a technology.”

“I always knew that women find it very difficult at times, some women, to find music. And this helps makes it easier with playlists, curated by real people.”

It just gets worse from there:

“I just thought of a problem: Girls are sitting around, you know, talking about boys. Or complaining about boys, when they have their heart broken or whatever,” Iovine told CBS. “And they need music for that, right? So it’s hard to find the right music. Not everybody has the right list, or knows a DJ or something.”

The ad stars Taraji P. Henson, Kerry Washington and Blige — Iovine initially said he wanted Oprah who “didn’t want to do it.”

Something tells us you might be hearing from Oprah now, Jimmy. Now where’s my DJ? My female pea-brain needs some beats.

UPDATE: Iovine reached out to BuzzFeed News to offer an apology for his statements:

“We created Apple Music to make finding the right music easier for everyone — men and women, young and old. Our new ad focuses on women, which is why I answered the way I did, but of course the same applies equally for men. I could have chosen my words better, and I apologize.”

Check out the ad below: