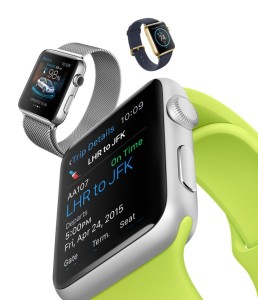 There will be only one way for people to get an Apple Watch when it becomes available for pre-order tomorrow: online. Apple announced today that it’s keeping all sales of the device during its launch period online-only, so nobody should plan on pre-ordering the device at Apple’s retail stores.

“Based on the tremendous interest from people visiting our stores, as well as the number of customers who have gone to the Apple Online Store to mark their favorite Apple Watch ahead of availability, we expect that strong customer demand will exceed our supply at launch,” Angela Ahrendts, Apple’s senior vice president of Retail and Online Stores, said in a press release. “To provide the best experience and selection to as many customers as we can, we will be taking orders for Apple Watch exclusively online during the initial launch period.”

People who want to prepare for pre-ordering the new smartwatch, which is slated for release on April 24, can view different models and their pricing through Apple’s online store and the Apple Store mobile app. After signing in to those different retail outlets, people can then pick out their favorite models for quick access when pre-ordering.

Early adopters who absolutely must have an Apple Watch on launch day would be well-advised to stay up late tonight. Apple’s online store will start accepting pre-orders at 12:01 a.m. Pacific Time, but people should expect that it will take a while to actually make a purchase. The load of everyone trying to buy a new Apple device usually slows the company’s online retail system to a crawl.

In addition to the opening of pre-orders, users will also be able to sign up tonight for an appointment to try on different watch models at their local Apple Store through Apple.com.