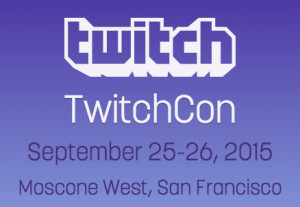 Twitch, the game streaming and social video company acquired by Amazon last year for $1 billion, was teasing a big announcement on its Twitch Weekly show today, and after a dramatic buildup, it turns out that the news is … Twitch will hold its first-ever TwitchCon in San Francisco in on Sept. 25 and 26.

No, it’s not exactly what we were expecting, either, but it will be a major event for Twitch users.

“Created as a celebration of all things Twitch, the convention will attract members of the Twitch community from all over the globe,” the company says in the official announcement. “Attendees will have the chance to mingle with each other and their favorite broadcasters, experience live content from the convention center, and learn from the community’s thought-leaders.”

You can’t buy tickets yet, but you can register here for email updates.