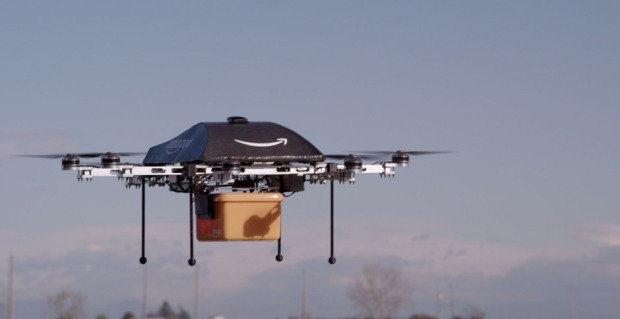 Amazon made it clear today that research and development of its delivery drones is happening at a rapid pace. Now, it wants the Federal Aviation Administration to keep up.

Amazon VP of Global Policy Paul Misener testified at a congressional hearing for the Senate Committee on Commerce, Science, and Transportation today in Washington D.C. and expressed particular concern for the FAA’s lack of long-term planning when it comes to unmanned aircraft systems (UAS).

“Where we lag behind is planning for future,” Misener said. “It’s that high degree of automation, the beyond line-of-sight flying. It’s coming. The Europeans are getting ready for it; we are not so much.”

As Misener outlined in his prepared remarks, Amazon has been testing its “Prime Air” delivery drones in other countries for some time. But last week, the FAA gave the green light to Amazon for testing outdoors in the U.S. — however, Misener said today that the permission was “more restrictive” than what Amazon received in the UK and elsewhere.

“Moreover, obtaining permission took far too long, and certainly much longer — over half a year — than it took in other countries,” he added.

On top of that, the drone that Amazon was approved to fly is already out-dated. While the company waited for FAA’s go-ahead, it re-designed its device, which effectively made the FAA-approved drone “obsolete,” according to Amazon.

The Seattle-based online retail giant said it asked the FAA on Friday for permission to fly one of its newest, more advanced drones, with Misener noting that “we are hopeful that this permission will be granted quickly.”

Misener admitted that FAA “has turned a corner,” but reinforced that federal officials must act more quickly as other countries develop their own regulations.

“I am a little bit upset, because it seems like when it comes to government moving at the speed of innovation — whether it’s in biologics, in the backlog at the patent offices, or this area — we are slowing this country, while innovation is going on at an extraordinary pace overseas,” Booker said. ” We are being left behind.”

Margaret Gilligan, FAA’s Associate Administrator for Aviation Safety, agreed with Misener and said her office is focusing on authorizing UAS operations beyond a visual line of sight. However, she noted several technological challenges in the way. For example, the FAA wants to address the issue of “sense and avoid” to ensure drones can avoid aerial traffic.

“We don’t yet have the technology standards,” Gilligan said.

Misener said that other countries have simply been more flexible, which has allowed Amazon to innovate more quickly abroad. He said the FAA should recognize that drones are a completely different type of aircraft than what has been around for decades.

“This isn’t a 777,” he said. “This is a little device. We’d like to be able to tweak things and move quickly and innovate. We call it iteration within Amazon. That means making new changes all the time, constantly improving and perfecting. We are almost to the spot with the FAA where we can do that domestically. It’s just taken a long time to get here.”

Amazon CEO Jeff Bezos unveiled the drone delivery plan in 2013 on 60 Minutes, part of a broader effort by the company to increase delivery speeds for customers. “I know this looks like science fiction,” Bezos said at the time. “It’s not.”

In Misener’s prepared remarks, which you can read below, he describes Amazon’s “large indoor R&D facility” in Seattle dedicated to Prime Air research development. He notes how Amazon wants to use drones to deliver products in 30 minutes or less from a distribution center, or, perhaps a retail store.

A glimpse into the future:

Not only do we think our customers will love this service, we believe it will benefit society more broadly. Once operational, Prime Air will increase the overall safety and efficiency of the current ground transportation system, by allowing people to skip the quick trip to the store or by decreasing package delivery by truck or car. For the same reasons, Prime Air will reduce buyers’ environmental footprint: if a consumer wants a small item quickly, instead of driving to go shopping or causing delivery automobiles to come to her home or office, a small, electrically-powered UAS will make the trip faster and more efficiently and cleanly. To realize these tremendous opportunities for innovation and other benefits in the United States, additional research and development – and, soon, rules of operation – are needed.