SAN FRANCISCO–Amazon just took aim at a growing area of Microsoft’s business today with the announcement of its new Amazon Machine Learning service on Amazon Web Services at its AWS Summit in San Francisco. As the name implies, it’s designed to make it easy for developers to take advantage of machine learning techniques without requiring a background in data science. 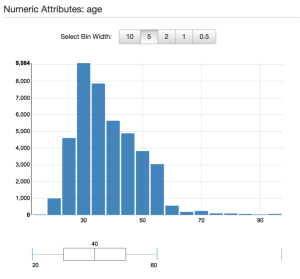 Machine learning provides a number of benefits for developers, and can power services like fraud detection, and user behavior prediction. But actually deploying those services can be difficult without an understanding of data science techniques.

Amazon Machine Learning has a set of APIs and wizards that help developers easily create models, along with a collection of interactive tools inside the AML console that allow people to tune that model and view the effect of changes on an existing data set that they have fed into the service.

Once they have a model, users can then run it asynchronously against a data set, or hook it up to live streaming data to provide real-time predictions.

Pricing for the service is split among its different functions – users will pay 42 cents an hour for time spent building a model, and 10 cents per 1,000 asynchronous batch predictions. The live streaming prediction service costs $0.0001 per prediction, rounded up to the nearest penny.

When announcing the new service, Andy Jassy, the senior vice president for AWS, highlighted Amazon’s background in machine learning powering services like its retail recommendations and ability to predict the gender of its customers.

Amazon Machine Learning is similar to the Azure Machine Learning service offered by Microsoft. The Redmond-based company, which is one of Amazon’s closest competitors in the cloud services market, has been pushing hard into the machine learning space. It recently closed an acquisition of Revolution Analytics, which makes a version of the R programming language used by data scientists around the world.