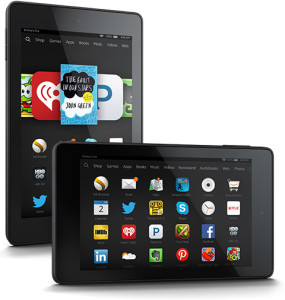 Amazon isn’t happy with a recent report from IDC that showed the company only shipping 1.7 million Fire tablets during the holiday quarter, a drop of almost 70 percent from the company’s sales during the same period in 2013.

In particular, a company spokesperson pointed out that “our most affordable tablet ever, the Fire HD 6 at $99, which is one of our high volume products, wasn’t included in the report.” Amazon declined to elaborate on its tablet sales figures beyond that.

IDC shot back, saying that it only counts devices as tablets if they have a screen size between 7 and 16 inches, which excludes the 6-inch Fire HD 6.

“At sizes below that, if the device has voice calling capability, we classify it as a phone,” IDC Senior Research Analyst Jitesh Ubrani told GeekWire via email. “If not, then we feel the device is more akin to traditional PMPs (e.g iPod touch). Hence we didn’t include it in our tablet figures.”

IDC estimated that the company sold 1.2 million Fire HD 6 units, meaning that roughly half of its total tablet sales came from the $99 tablet. Even with that factored in, sales of Amazon’s Fire tablets during the fourth quarter of 2014 dropped 50 percent year-over-year, the most of any tablet maker among the top five sellers.

Those sales numbers are still low enough to keep Amazon in fifth place for tablet market share overall, behind Asus and Lenovo, which both passed the Seattle-based company in the rankings for 2014.