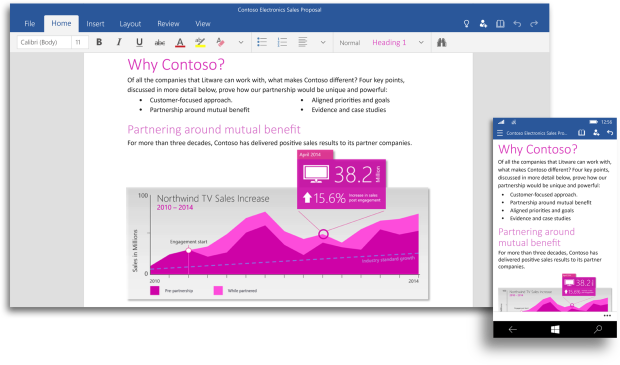 Microsoft has launched a new preview of its Office apps for Windows 10 today, giving users early access to the first touch-first universal version of its productivity suite that will run on tablets, PCs and phones.

Members of the Windows Insider Program can download new versions of Word, Excel, PowerPoint and OneNote from the Windows Store on a PC or tablet running the latest build of Windows 10. Microsoft says that versions of the apps capable on running on Windows Phone devices with Windows 10 installed will be available in the coming weeks.

The apps, which Microsoft revealed a couple weeks ago, will finally bring a native office experience to Windows tablets – something that has been missing since the launch of Windows 8. Like other parts of the Windows Insider Program, the apps are still unfinished, so users will likely experience more bugs and other issues than they would otherwise.

People who want a stable version of the apps will be waiting for a while. Microsoft said that they’ll be available later this year as a full consumer release. In addition, Microsoft plans to launch Office 2016 later this year, though it’s not clear if that update will coincide with the full launch of the Windows 10 Office apps.