The new feature — introduced in an email today to Echo owners — prompts owners to enter a starting and ending address in the settings of the companion Echo app. Then, a simple, “Alexa, how is traffic?” gets the Internet-connected Echo to verbally suggest a main route, along with an estimated travel time based on current traffic conditions. 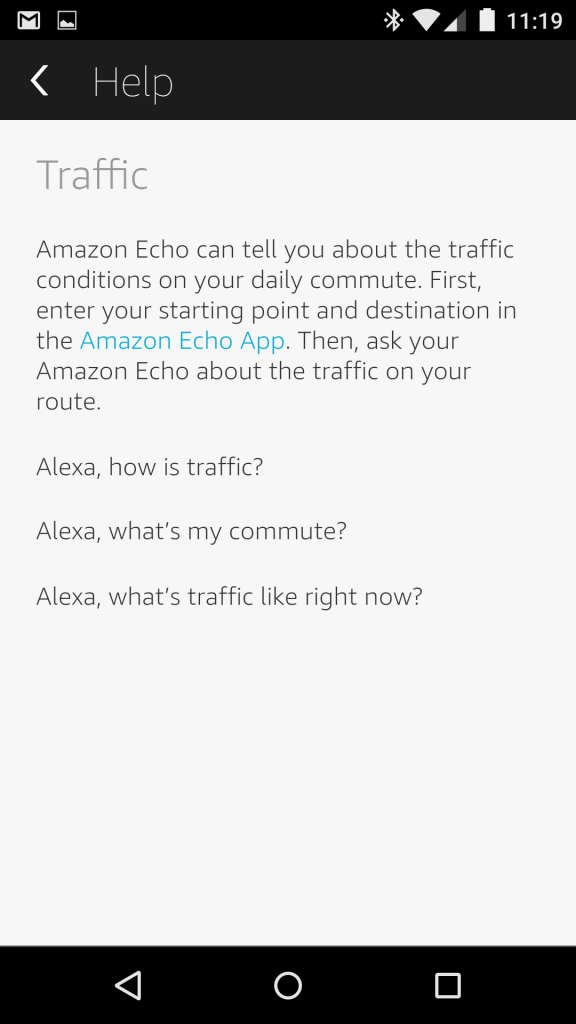 The same information, with additional details on alternate routes and their travel times, also appears on the screen of the Echo app for Android, iOS or Amazon Fire devices.

While the start and end addresses can be changed in the Echo app at will, it’s pretty clear this feature is designed for those with a regular commute or route that starts where the Echo lives. A quick, “Alexa, what’s traffic right like now?” as one is preparing to leave the house could be very useful during rush hour, for example.

My own test went very smoothly — the Echo app had already pre-populated the starting address as the address to which the Echo was registered. After entering the GeekWire offices as my destination, Alexa was immediately able to respond with both a route (in Seattle, “15th Avenue West and NW Leary Way”) and a time in minutes. The estimate changed when I asked again, five minutes later.

Amazon Echo’s help screens get to the source of Alexa’s cloud intelligence for drivers and note, “Traffic information is provided by HERE, a Nokia company.” The email sent to owners implies the new feature is in response to customer requests: “Last week you asked for traffic reports (Thanks, @nutschell!). We’re happy to let you know that they are now available.”

Amazon recently has begun communicating weekly with owners by email with new Echo features and functionality (sometimes with the emphasis on the “fun”). A week ago, Alexa added the capability to respond to questions about NBA and NHL sports scores. Earlier, Amazon announced a third-party SDK for developing Echo apps.

The latest “fun” addition? St. Patrick’s Day music (a Prime playlist, “Celtic Music”) and humor. Asking “Alexa, tell me a St. Patrick’s Day joke” results in, “Why don’t you iron four-leaf clovers? Because you don’t want to press your luck.” (Yeah. She’s got a million of ’em. Or so it seems.)

Amazon Echo is still available only by invitation, at a price of $199 that’s discounted to $99 for Amazon Prime members.