Amazon is marking the 10th anniversary of its Amazon Prime membership program today, celebrating an initiative that has turned into a key growth driver for the company — as evidenced by Amazon’s surprisingly strong earnings report last week.

The program, with its core benefits of free two-day shipping and movie streaming, saw its membership grow by 53% last year, despite a $20 price hike that raised the annual cost of Prime to $99. A recent study found that Amazon Prime members spend $1,500 a year on average, compared to non-members who spend about $625 a year.

But how many Amazon Prime members are there? Amazon released this graphic this morning with tons of statistics on Prime, but the company is still not answering that question, except to repeat its statement that there are “tens of millions of members.” 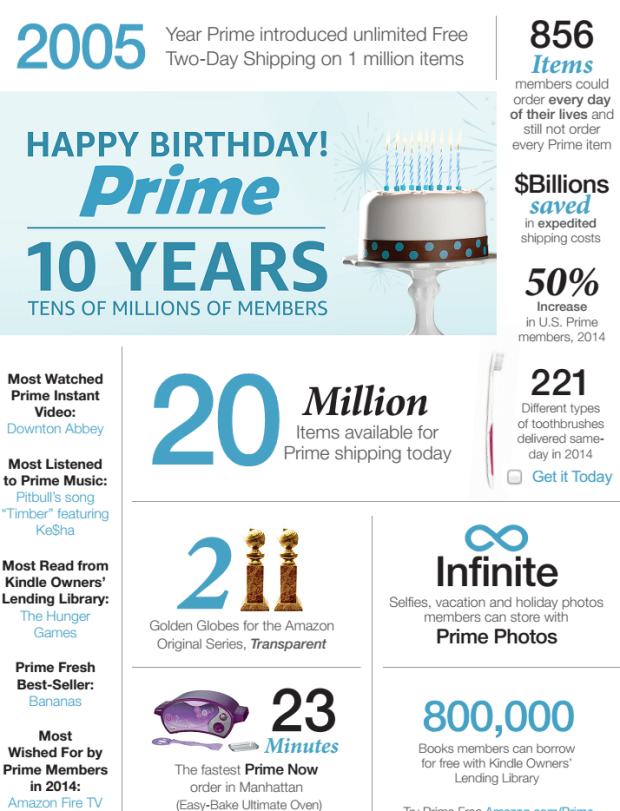 A report by Consumer Intelligence Research Partners recently estimated the number of Prime members to be 40 million.

Numbers aside, Amazon Prime is a great example of bottoms-up innovation at the company. Here’s how journalist Brad Stone told the story of Amazon Prime’s creation in a 2010 piece.

Prime came to life in late 2004, the result of a years-long search at Amazon for the right loyalty program. An Amazon software engineer named Charlie Ward first suggested the idea of a free shipping service via a suggestion box feature on Amazon’s internal Web site, according to Ward’s colleagues at the time. Bing Gordon, an Amazon board member and venture capitalist, says he came up with the “Prime” name, while other executives, including Chief Executive Jeffrey P. Bezos himself, devised the free two-day shipping offer, which exploited Amazon’s ability to accelerate the handling of individual items in its distribution centers.

A recent report by Re/code speculated that Amazon was gearing up to release the specific number of Prime subscribers, but so far, at least, that isn’t the case. We’ve contacted the company this morning just in case they have decided to disclose it.