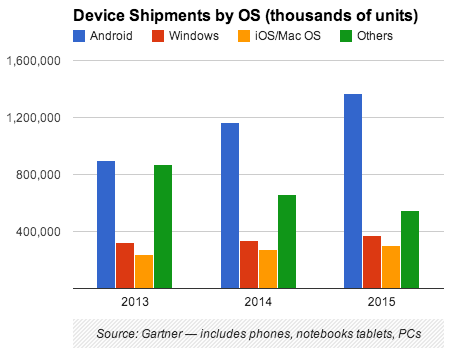 The lines between PCs, notebooks, tablets and smartphones are getting blurrier by the day, which makes a new forecast from Gartner especially noteworthy.

As part of its updated global device shipment projections, released this morning, the research firm gave its expectations for overall growth of Android, Mac/iOS and Windows shipments across all major types of devices through the end of next year.

The summary: Android is expected to see 1.37 billion device shipments in 2015, with Windows coming in a distant second at 374 million, followed by Apple’s combined Mac and iOS shipments of 301 million.

Yes, if you’re keeping score at home, that projection translates into a 1-billion unit lead for the Google-backed mobile operating system next year.

The bulk of Windows shipments will continue to come from traditional PCs, including desktop and notebook computers. Gartner says the PC market is expected to decline by 2.9 percent this year, which is considered a positive trend following the 9.5 decline last year.  Gartner says Windows Phone market share should reach 10 percent market share in 2018, up from 4 percent this year.

Here’s how Gartner sees things shaking out by device type, with phones and tablets leading the way …