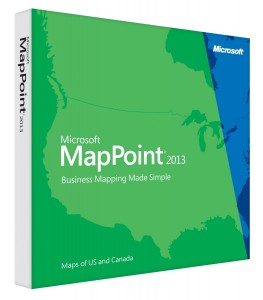 Businesses and individuals still using Microsoft’s MapPoint and Streets & Trips need to start thinking about alternatives. Microsoft is discontinuing both products, according to notices posted on their sites.

The company says it will stop selling MapPoint and Streets & Trips 2013 at the end of this year, and Microsoft will offer online support to users of the latest edition of Streets & Trips through July 14, 2015.

MapPoint provides tools for businesses to combine their business data with locations and maps. It came out of a product called AutoRoute, which was first released in 1988 by NextBase, a U.K.-based company that was acquired by Microsoft in 1994. Streets & Trips, which is also a part of the AutoRoute family tree, is built for road-trippers who want to plan out an itinerary on their PC before taking off on the open road.

Microsoft suggests that Streets and Trips users who want maps and directions should turn to Bing Maps instead. Developers can use the Bing Maps API and SDKs, which provide a number of tools for applications that need to user mapping data.

The company recommends that businesses currently relying on MapPoint turn to PowerBI for Excel and Sharepoint in order to visualize their business data on a map.

These are just the latest two products in a long string of closures from the Redmond-based tech giant. Earlier this year, Microsoft shut down Farecast, its airfare prediction tool.