As Christmas Day approaches, parents everywhere are looking for ways to keep their kids satisfied while they wait for the inevitable arrival of presents. Thanks to a decades-old tradition and the power of the internet, families everywhere can check in on the position of Santa as the jolly Christmas fixture makes his trip around the world.

Like every year, NORAD is turning its powers of observation towards tracking Santa through his trip around the world with a special site powered by a consortium of tech companies, including Microsoft. Users can watch as a 3D model of Santa and his flying reindeer passes over a map of the world, and view “Santa Cam” videos of the whole team passing by world landmarks. 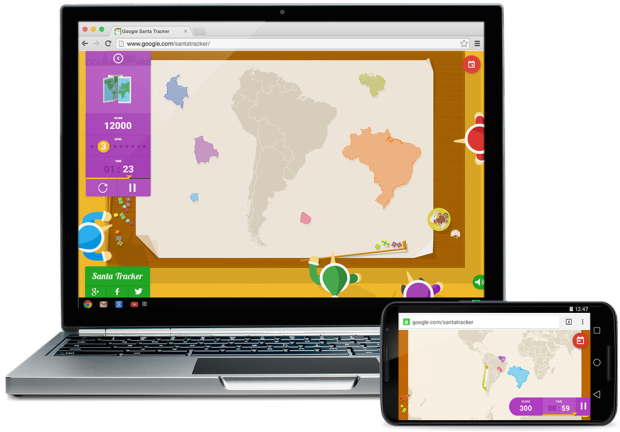 For people who prefer their information come from a different tech company, Google also offers a santa tracking website and app. The company used to be the official provider for NORAD’s tracker, but stopped running the service in 2011.

The tradition of tracking Santa got its start in 1955, when the Continental Air Defense Command (NORAD’s predecessor, CONAD) received calls on Christmas after a misprinted Sears and Roebuck ad accidentally listed a CONAD hotline in place of a number kids could call to speak with Santa. Col. Harry Shoup, who this reporter can only assume had the patience of a saint, fielded calls in character as St. Nick. Ever since then, the organization has offered Santa-tracking services.

A word of warning to parents everywhere: stick to one Santa tracker. Here’s why (kids, close your eyes): each tracker reports different locations for the man in red. To avoid some…uncomfortable conversations about the respective powers of radar and Santa, it’s best to stick with just one.