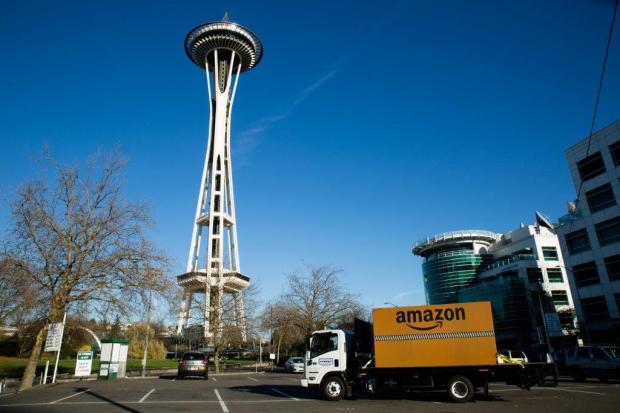 What is it with Amazon and big, mysterious boxes? Amazon says it’s in the process of making 15 “special deliveries” around the U.S. over the coming week as a part of its holiday rush. The company sent GeekWire the picture above, showing a big box on a flatbed truck across the street from the Space Needle, and there are other boxes popping up around the country.

Case in point: Re/code snapped a picture of one box strapped to a flatbed truck in San Francisco’s SoMA neighborhood earlier today.

An Amazon representative said in an email that the company is “excited to make some special deliveries throughout next week.”

As for what’s in the box? That’s anyone’s guess. Amazon said that people should “stay tuned” to find out more about what the company has in store. According to the Re/code report, it’s a part of a “new program” the company plans to announce soon.

This isn’t the first time the company has used giant, attention-grabbing mystery boxes to hype up its products, either: in January, the company delivered Nissan cars purchased through a special promotion using large boxes like this one, though Re/code said that the San Francisco box is too small for a car. In May, Amazon planted a giant locker near San Francisco’s Ferry building or another car promotion.

It’s also unclear where the other giant boxes are – I haven’t been able to dredge up any other sightings on Twitter – so Amazon may be slow-rolling the rest of us until later next week.

Any ideas about what Amazon’s hiding in there? Let us know in the comments.