According to new research into wireless network performance released by RootMetrics, Verizon has the best overall service, though AT&T is nipping at its heels. The Seattle-based wireless metrics company tested performance by all four major carriers in every state, driving almost 218,000 miles and collecting more than 4.6 million data points in the process. 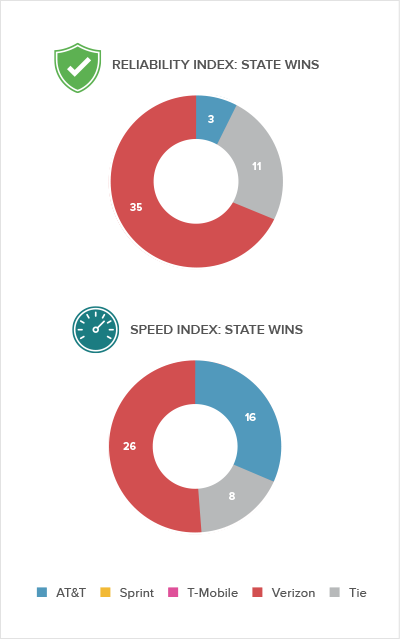 Each carrier was rated on a number of factors, including speed, reliability, and performance of their cellular and data networks. Verizon earned an overall score of 89.7 points out of 100, with AT&T pulling in a close second at 86.2 points. While AT&T eked out a win in Root’s speed index, Verizon earned a higher score in every other category, and did particularly well in terms of reliability compared to its competition.

A possible explanation for AT&T’s win on speed has to do with Verizon’s roll-out of new AWS wireless spectrum to bolster its data speeds. Root didn’t test Verizon’s network with AWS capable devices, which could have reported better speed scores, according to a statement from the company emailed to GeekWire.

Bellevue-based T-Mobile USA didn’t fare nearly as well. While it managed to pull ahead of Sprint in the speed category, it lagged behind its closest competitor in every other metric. According to the report, that’s because T-Mobile posts much better performance in cities than in more rural parts of the country.

If anyone wants to know why Sprint Chairman Masayoshi Son is really interested in buying T-Mobile, these scores are a good explanation. There is a massive gulf between second and third place in the overall rankings that favors AT&T and Verizon ahead of Sprint and T-Mobile. Son has argued that a merger would improve competition in the wireless space by creating a third carrier that can compete on performance with the two largest carriers in the country.

Update: T-Mobile CEO John Legere isn’t too thrilled with the survey, and took to Twitter to vent his disagreement:

We've said it before, but I’m happy to say it again. We look at REAL results from REAL people when we make network claims. #uncarrier

Here’s a detailed look at how the scores for each carrier broke down, courtesy of RootMetrics: 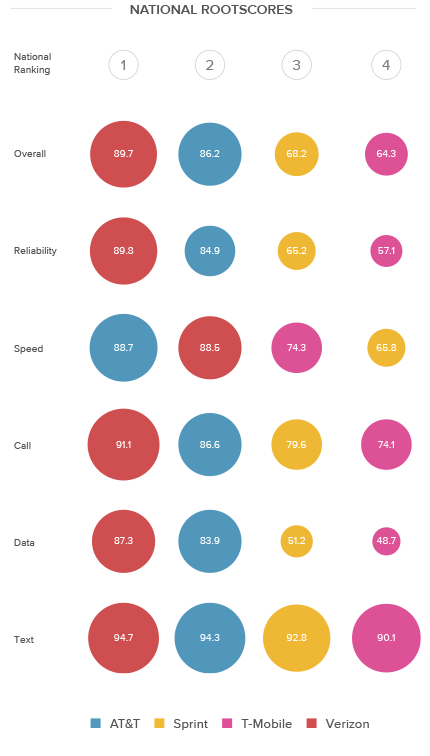