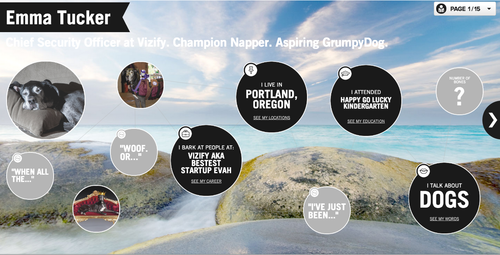 Vizify, a Portland-based startup that turns your social media chatter into visualizations, today was acquired by Yahoo.

Founded by Todd Silverstein, Jeff Cutler-Stamm, and Eli Tucker in 2011, Vizify is all about helping individuals make great first impressions. It does this by sucking in information that people already share online on social networking sites, and turning that data into easy-to-consume visualizations. Users can also create their own domains and access back-end analytics.

As a result of the acquisition, Vizify will be shutting down its service and will no longer be accepting new users as of Wednesday.

“Since last summer, we’ve been engaged in a conversation with some of the incredible folks at Yahoo about the ways this more visual approach to data can inspire and entertain,” the company wrote today. “As our conversations progressed, we realized we’d found a partner who shared our passion for user experience, design, and visualizing information. Ultimately, we just couldn’t say no to the opportunity to bring our vision to the hundreds of millions of people who use Yahoo every day.”

Terms of the deal were not disclosed. The company said it is “excited to bring a more visual approach to data at Yahoo.”

Vizify is unique because it participated in both the Portland Seed Fund and TechStars Seattle incubation programs. Today’s deal marks the third Techstars Seattle grad to be acquired; others include companies like GoMiles (bought by Traxo in 2012) and Thinkfuse (acquired by Salesforce in 2012).

This marks the 37th acquisition for Yahoo CEO Marissa Mayer’s since the 38-year-old took over in July of 2012, most of which have been small companies in the social, gaming and content spaces. This is Yahoo’s eighth acquisition of 2014.

Wednesday’s deal is also the second acquisition of a Portland company this year. Online banking startup Simple was swooped up by Spanish banking giant BBVA last month in a deal valued at $117 million.

Existing premium Vizify users will be refunded for what anything they’ve paid to the company. More details about what’s happening to Vizify accounts can be found here.

The five-person team at Vizify will join Yahoo’s media product organization in San Francisco. A Yahoo spokesperson wouldn’t divulge many more details, only saying that “we have found in Vizify a company that shares our passion for visualization technology and the user experience.”