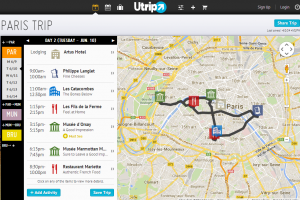 Planning a trip can be a stressful task, and one Seattle startup wants to use artificial intelligence and local expertise to do it for you.

Utrip today launched out of beta and also announced that it has raised $750,000 in a round led by Virtuoso CEO Matthew Upchurch and New York-based CB Alliance.

Utrip, founded in April 2011 by University of Washington grads Gilad Berenstein, Edan Shahar and Yair Berenstein, is essentially a virtual travel agent that uses predictive technology to quickly create itineraries based on interests, time and budget.

For now, Utrip is focusing on European countries and cities, with 28 total destinations to pick from. It also offers 54 “Featured Trips,” that allow experts in various fields to plan your next vacation.

The startup has been in beta for the past 20 months, but today is officially releasing its product. Utrip also announced that Upchurch, former Yahoo! Travel exec Matt Klein and former Amazon VP Felix Anthony have joined its advisory group.

Total funding to date is now $1.1 million for Utrip. Learn more about the company with our Startup Spotlight.