Apple rolled out some significant across-the-board updates to its iWork productivity suite on iOS, Mac and web today. The new features make Apple’s office suite, which includes word processing, presentation and spreadsheet software, a more compelling alternative to Office, even as Microsoft rolls out a version of its popular productivity apps for the iPad. 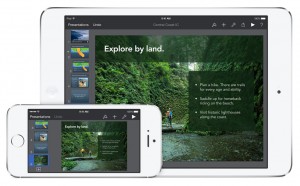 All three of the iWork apps received the ability to share read-only documents, so users can send a file off to a colleague without having to worry about it getting edited. In addition, the apps received expanded support for AppleScript on the Mac, which should help address criticisms from users who haven’t switched to the new apps because of a lack of scripting support.

In addition to the across-the-board changes, the individual apps have also received some incremental updates. Word-processing app Pages got changes including better support for wrapping text around inserted and pasted objects, and now works better with bi-directional text, so it’s easier for users to write in scripts like Arabic and Hebrew which are read from right to left.

The updates to Keynote include the ability to export to Microsoft’s PPTX file format, as well as a handful of new transitions and refinements to existing animations. Keynote also gained support for animated GIF files. Keynote for iPad also got a virtual laser pointer and the ability to draw on slides by touching the screen, much like what Microsoft offers through PowerPoint for iPad.

Numbers, which is Apple’s answer to Microsoft Excel, gained the ability to import data from a CSV file just by dragging and dropping the file onto a spreadsheet page. It’s an interesting feature for users who want to be able to quickly process comma-separated data on the fly without creating a new spreadsheet. In addition, Apple said that the update improves compatibility with Microsoft Excel files, along with a smattering of other features. 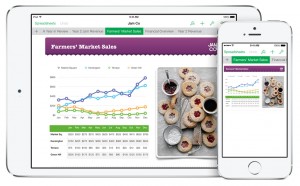 The updates come a week after Microsoft launched Office for iPad, which offers Office 365 subscribers the ability to edit Word, PowerPoint, and Excel files using Microsoft apps designed for Apple’s tablet. Unlike Microsoft’s apps, Apple offers iWork for free with the purchase of a new iOS device or Mac, and is clearly hoping that free offering will draw people away from Office 365. Microsoft’s new offering has proven popular, though: Word, Excel, Powerpoint and OneNote for iPad make up four of the top five free apps for the iPad.

The iWork Suite is available through the Mac App Store and the iOS App Store.