Wal-Mart, McDonald’s, Subway — these are the top three businesses that have the most foot traffic per day in America according to new data from Seattle location analytics startup Placed.

The four-year-old company today unveiled a new monthly ranking of the most popular U.S. businesses called Placed 100. The list crunches data from Placed Insights, which each month measures real world behaviors based on 500,000 smartphone users who have opted-in to have their locations tracked.

The October 2014 list, which you see above, isn’t all the surprising given how many locations each business has in America and the frequency of transaction — 50 percent are fast food joints. What’s more interesting are the detailed profiles of each company, which reveal similar stores that people are likely to visit and which apps they’ most likely have installed on their phones. 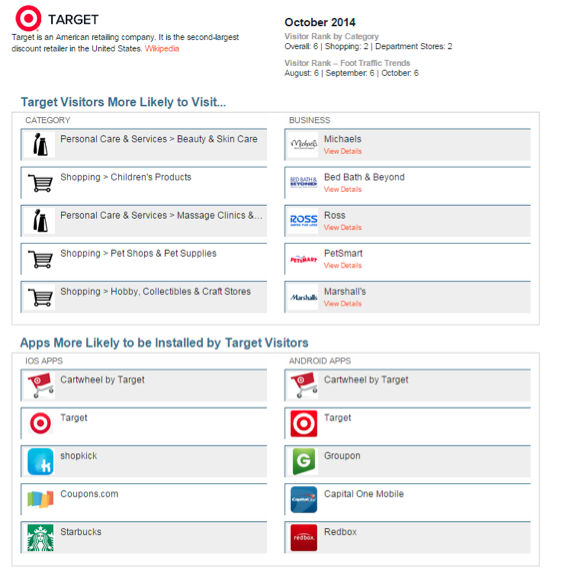 Here’s the profile for Starbucks:

And a few other tech-related companies:

Placed also noticed a few October-specific trends, with Party City moving up 23 places in the month, while retailers represented three of the top five decliners month over month.

“Declines could be associated with the general lull in retail between back-to-school, and holiday shopping,” the company noted.

Placed now employs more than 30 and has raised $13.5 million to date from Madrona Venture Group and Two Sigma Ventures.