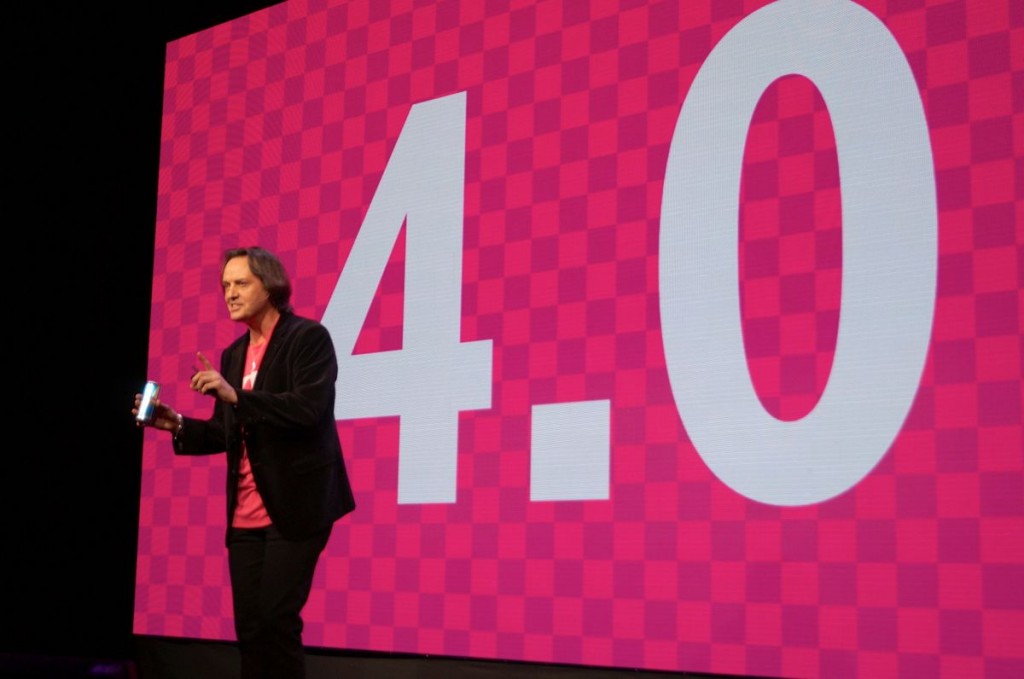 LAS VEGAS — Wielding a can of Red Bull, energetic and outspoken T-Mobile CEO John Legere took to the stage today at CES to lay out the Bellevue-based wireless carrier’s next moves — including a plan to credit as much as $650 to people who switch to T-Mobile from rival carriers. He also announced continued growth in T-Mobile’s customer base, with more than 1.6 million new customers in the fourth quarter.

But first he took a little time to bash his rivals.

It was classic Legere who has been a one-man wrecking crew in the wireless industry since taking the top job at T-Mobile in Sept. 2012, repositioning the once troubled carrier. Last year at CES, you may recall that Legere referred to AT&T’s network in New York as “crap.”

Well, Legere — fresh off of getting kicked out of the AT&T party this week at CES — was back again in full force ripping his rivals. Legere is starting to rival a late-night comedian with his off-the-chart remarks, mastering the age-old business tactic of “punching up.” 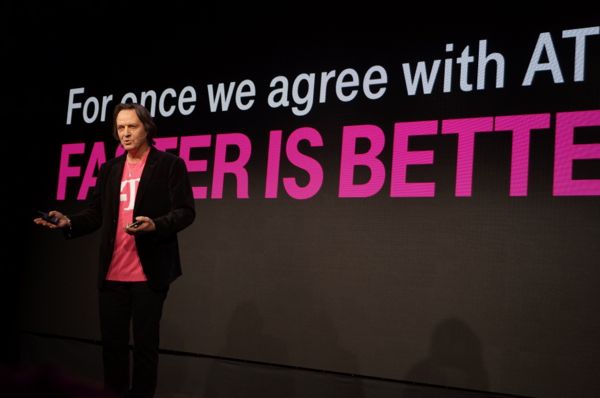 “Now, let’s start with Verizon. I want to give them huge credit for standing up and saying: ‘Our network is bloated, the speeds are too slow, we are going to do something about it.’ That’s the way you stand up and solve a problem. However, in this industry, when there is a problem and your network is slow, you should be able to lead. ‘That’s it. I will be back when things are better.’ You don’t download. I am leaving. You will be back later. But they lost sight of their customers, because of their success and they took customers for granted.

“Now, what I am going to talk a lot about here today towards the end is, I have come to the understanding and the final conclusions, that one of the biggest evils in this industry is the family plan. And if you think about it, we grew up thinking that the family plan was a nice thing to give a family. They all sat together, so they got lower prices and it was good for everybody. That is total horse shit.  A family plan is nothing more than a contract on super steroids with staggered dates — a complete life sentence. And, by the way, I said it jokingly last year, but the data caps in the family plan have forced the people in the family to think each other is the problem with the limitations on their data. And it is not Joe Shmoe pulling down porn that’s the problem. It’s that the family plan has a data cap that is too low for everybody, and it is part of a data monetization strategy that Verizon talks about all of the time. So, summary on Verizon: ‘Hey, not us. 55% EBITIDA margins, we don’t want to compete with those guys. Everything is great. We are the best network in the world.’ Ugh, hold that thought.” 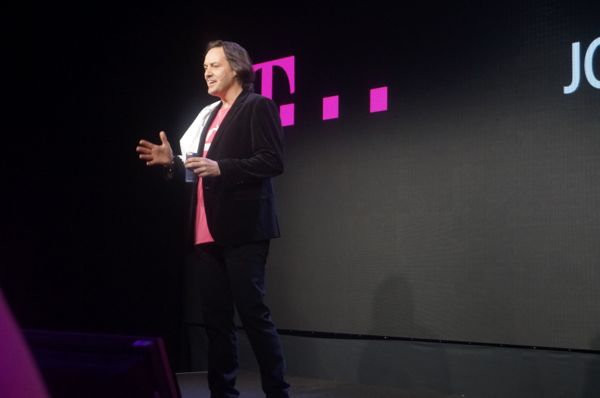 “OK, Sprint. I will make this quick. Sprint is a pile of spectrum waiting to be turned into a capability. Right now, their network is completely horrible. They have got high, medium and low and they keep talking about ‘pardon our dust while we redecorate.’ Why then right after do they keep announcing things? The network monetization plan took forever. That Spanky thing or whatever that they announced, Sparky, I mean come on. People in lab coats talking about what’s going to happen when my daughter is president of the United States. That’s another thing where I would just say, whether it’s this the zombie commercials or James Earl talking about the tweets that I have no idea what they were talking about. Student plans at Best Buy. Did I really hear “framily” yesterday? But I wasn’t surprised because last week I heard they might bring the Nextel brand back.

“I would just summarize them as an impaired brand right now with a network capability that won’t be here for a while. Customers should be able to leave, and when it turns out to be whatever they are going to have that ‘Beams up Scotty’ then go back.” 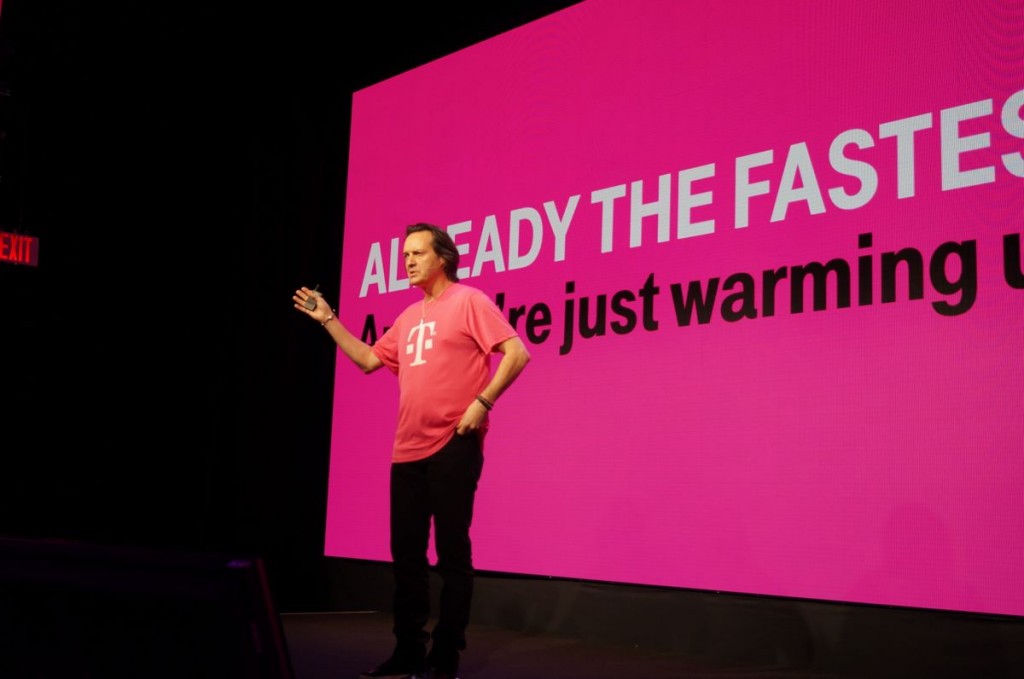 “I forgot one: AT&T. AT&T is a total source of amusement for me because they are the one that takes my bullshit. Dumb move. They take the bait. And they talk in corporate speak. Now, finally when they get around to looking at handset subsidization, and they couldn’t do it. Did they just say: ‘That is a competitive environment and our customers need subsidization?

“No. The geniuses came out and said something along the lines of: ‘When the saturation point in the industry reaches over 92 percent, economically…’ Come on! You got hosed. And what you are going to see then is, these are fat cats that can’t move. I was watching TV the other day after they announced their plan to kind of win the customers back that we took from them that I will explain in a second. Why don’t you have the balls to answer the question.

‘Hey, is this targeted at T-Mobile because they are taking a piece out of you?’ ..

‘No, I would like to give our customers a chance to experience our network and our JD Power-winning…’ Come on. Bullshit. You will have the answer in a few seconds.

“Sponsored Data. I’ll take that in Q&A. That is the biggest horseshit in the world.”

See a full recap of the T-Mobile press event here with GeekWire’s notes from the live event.